A Green-Washed Global Economy – A Delusion That May Crash It

‘Modernity and the Middle East historically have never made for comfortable bed-fellows. Nor has this tense co-habitation been an uplifting experience; far from it – it has been hugely disruptive. It has encompassed enforced population transfers, the disembedding of people from the community, from culture and from their land. It has been accompanied by episodes of mandated secularism, even extending to requiring obligatory modes of western dress. It saw the 19C Islamic Renaissance overshadowed by verification, old myths went and Islam hanging on in the 1920s by its merest fingernails – and with the regions’ youngsters captivated by the lures of alien socialism. 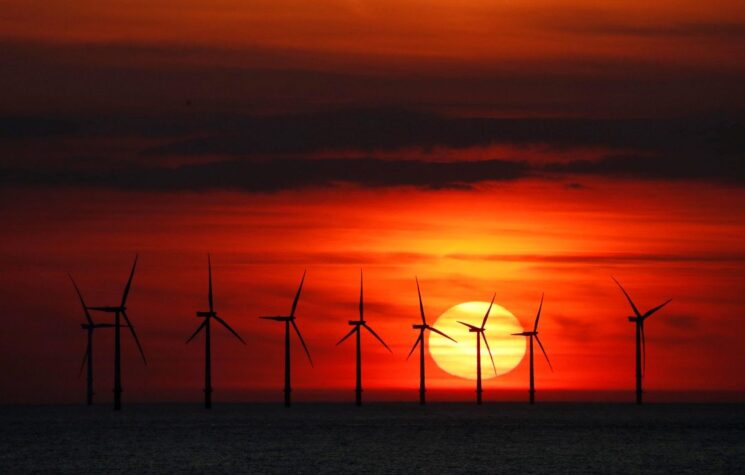 Today, the western Establishment is implementing a double re-boot to its dilapidating legitimising myth. They call it a ‘Re-set’. It is indeed a subsequent, ‘downloaded’ uprate of its operating system – no longer so much focussed on democracy and freedom across the globe; that narrative is being quietly retired, following the divisive November U.S. elections.

No, an altruistic West today is leading a massed cavalry charge to ‘save our planet from climate change. This is updated western ‘modernity. Moreover, the Establishment ‘values’ have been upgraded in line with its new mission. The new, more ‘sensitive’ Establishment operative is fiercely opposed to ‘white supremacy, to racial and social ‘inequity’, and otherwise wholly committed to the Green Agenda and to enforcing Human (gender and identity) Rights across the board.

This represents a huge shift from the small team at the CFR (Council on Foreign Relations) who, in the early 1940s, sought American imperialism based, not on the discredited British or French literal colonialism, but one rooted in virtue-signalling universal values and backed by massive fire-power.

A quiet ‘revolution’ amongst the élites – is it not? Yes; and a big shift too from the ethos of those who originally funded the CFR (Financiers Rockefeller and JP Morgan) – ‘Barons’ of rugged, super-sized ‘frontier’ capitalism.

Today, even neoliberal Wall Street is being ‘green-washed. It is now doing socially, environmentally and financially responsible investing (ESG). And since Green is the narrative, so is the wave of pro-ESG investing which every single bank is pitching to its clients because – well, you know – it’s the socially, environmentally and financially responsible thing to be doing (sarcasm). It turns out that the most popular holdings of all those virtue-signalling ESG funds are companies such as. … Microsoft, Alphabet, Apple and Amazon, for which one would be hard-pressed to explain how their actions do anything that is of benefit for the environment.

What might this mindset shift portend for the region? Will much change? Nominally, the American-led order will change, but control will stay. Only it will be a climate-based control through rules on CO2 emissions; a global framework for health and pandemics; and a Central Bank regulatory framework for a digital monetary system.

Should this ‘Re-set’ succeed – and that is by no means assured – its potential disruption to the Middle East region may rival that of the earlier 19th-century turmoil:

“ … the U.S. has a variety of “tools” at its disposal to enforce its climate goals on the world. Biden already speaks of the use of carbon tariffs, fees or quotas on carbon-intensive goods from countries that are “failing to meet their climate and environmental obligations” …

“Climate would thus provide the Biden administration with an argument to pursue Donald Trump’s protectionist aims by other means. As Biden put it during his campaign: “Countries that fail to meet their climate responsibilities won’t be allowed to erode global progress with cheap, carbon-dirty goods”. A hard line against “carbon-dirty goods” – would thus be a way to “protect American jobs” … But there is much more in the toolbox. Climate goals provide ample justification for strong interventions into the domestic politics of nations, including support for selected parties, social movements and NGOs”.

“ …The simple fact is that developing countries need energy and they are expanding their fossil fuel infrastructure accordingly. This can be seen clearly from the construction of oil and gas pipelines. Will the U.S. under Biden attempt to stop these projects in the name of saving the climate?”.

Alexis de Tocqueville would have well-understood the meaning of this dumb, slow march of incremental global regulation across climate, health and rights. Writing in 1835, he predicted that society would fall into a new kind of servitude which “covers the surface of society with a network of small complicated rules”, which “does not tyrannise but compresses, enervates, extinguishes and stupefies people, till each nation is reduced to be nothing better than a flock of timid and industrious animals of which the government is the Sheppard”.

Some Middle Eastern states may sit on the sidelines, waiting to see whether a forced return to a continuation of the U.S. hegemonic agenda really is feasible today; and to await too, a coming epic climax to this struggle – as resistance builds. For the reality is that Euro-U.S. authority is wafer-thin; its people deeply divided; its systems decried as rigged; and as multiple crises are easily visible on the horizon.

To re-establish a global imperial class the Biden team would have to force a psychologically climacteric back down onto the Russia-China-Iran axis – one which (like the Cold War outcome) would seem to vindicate the western update to its ‘operating system’. This, however, does not seem a likely prospect.

Some Gulf States, which already have embraced a western post-modernity, are going down the ‘Davos’ Re-set roadmap: concentrating their economies within a tight, controlling circle; maximising centralised operationality. But above all, they have embraced the Davos mantra of the Fourth Industrial Revolution (4IR) in which AI, robots and Tech change the world (as a supply-side ‘miracle’).

Let’s just pause there a moment: What is going on?

Well, when U.S. Big Tech started, its platforms were tools that might help humans communicate more easily and more conveniently. Nothing more. Then things changed. Firstly, they found that their surveillance of everything their users watched, or in which they showed any interest (or evidenced an altered emotional state), allowed the platforms to know the individual perfectly – and, then secondly, from that, to predict behaviour. It was only one short step beyond understanding that if individuals were so predictable, and would unerringly respond to the platform’s psychological cues, they could ‘nudge’ their behaviour and beliefs. They were getting mind control without human intervention and it was done by the algorithms.

The point here is that the process was making the oligarchs fantastically rich through managing complex mind-control that they could sell. In short, the process, the AI, was all. Users were just its fodder.

And now, this Platform AI approach is being extended to the economy. We stand at the very “edge of a fundamental reshaping of finance”, the CEO of the world’s biggest Hedge Fund, Blackrock, asserts. CO2 emissions are being monetized and vast financial machinery created, tying asset valuations to parameters such as ‘carbon intensity’, ‘sustainability indices’, and to the new ‘value variables’, such as how many or few LBGTQ are employed. Once cost, they will be traded and futures bought and sold.

In the same way that social platforms of today allow the young to virtue signal to ‘friends’, and through the illusion of likes and thumbs up emojis, to feel to be a part of some ‘real’ community of the like-minded, so concomitantly, the same principles of using AI mind control to shuffle ESG variables will allow Wall Street Funds to present to each investor that particular virtue-image of a company which AI determines he or she would most like to see.

With western economies becoming more and more make-believe, this represents a brilliant hook with which to gin-up investors into believing they are fixing the world by investing in “ESG“, when instead they are just making Larry Fink and Jamie Dimon richer. Maybe this playing of a virtual economic ESG ‘game’ will become as addictive as Fortnite.

“After all, who can possibly be against fixing the climate, even if it costs quadrillions … or rather, especially if it costs quadrillions – because in one fell swoop, central banks assured themselves a carte blanche to print as much money as they would ever need, because who would refuse … if it was to make sure future generations have a better life?

“This week the former chief investment officer for Sustainable Investing at BlackRock, wrote an op-ed in USA Today admitting that Wall Street is greenwashing the financial world, making sustainable investing merely PR – a distraction. “The financial services industry is duping the American public with its pro-environment, sustainable investing practices. This multitrillion dollar arena of socially conscious investing is being presented as something it’s not. In essence, Wall Street is greenwashing the economic system and, in the process, creating a deadly distraction. I should know; I was at the heart of it””.

In other words, as existing market bubbles falter, and eventually pop, we will need a new bubble – a ‘green bubble’ of sustainable investing (until that too, crashes). But there is, too, a darker side to this Tech ‘gaming’. It is that algorithms are rapidly becoming the Ends. It is they who determine how to incentivise us, and to ‘nudge us’ towards behaviour that gives financial gain to the platform oligarchs. This metamorphosis is absolutely implicit in the ‘Davos’ agenda. Robots, AI and machine vision and recognition will advance and predominate, with most humans being relegated to paid ‘gardening leave’ (perhaps until dispensed with altogether, as machines assume human qualities and become trans-human).

These aspects may seem far off to those living in the region, and may not unduly worry them. But this should:

Proponents of green policies have long warned (since before the 2016 U.S. elections) that the failure of investors to understand the radical impact of a switch from old (democracy spreading) values to ‘Saving the Planet’ has led to a huge overvaluation of fossil fuel-linked assets – based on investors’ assumptions that growth in worldwide consumption of these latter fuels must continue – and that governments will take only baby-steps to lessen it. Yet, a rapid transition to C02-free energy sources potentially would leave behind a mountain of ‘stranded fossil fuel assets’, which would have to be written off because their underlying real value has evaporated.

In 2015, the Governor of the Bank of England, Mark Carney, said:

Changes in policy, technology and physical risks could prompt a reassessment of the value of a large range of assets. The speed at which such re-pricing occurs, is uncertain; and could be decisive for financial stability … While a given physical manifestation of climate change – a flood or storm – may not directly affect a corporate bond’s value, policy action to promote the transition towards a low-carbon economy could spark a fundamental reassessment … [A] wholesale reassessment of prospects, especially if it were to occur suddenly – could potentially destabilize markets, spark a pro-cyclical crystallization of losses, and a persistent tightening of financial conditions.

In 2019, Carney, while still Bank of England governor, practically called upon investors to drop their financial exposure to fossil fuel-connected assets. In a BBC interview on January 30 that year, he highlighted the threat to pension funds, warning that:

Up to 80% of global coal assets and up to half the world’s proven oil reserves could become stranded assets as the world moves to curb carbon emissions and [as] supplies of clean, renewable energy continue to replace fossil fuels.

Well, Carney is a known Davos devotee; yet nevertheless, the ‘transition towards a low-carbon economy’ has now arrived. Or at least is being promised by Biden et al, as the means by which the U.S. can re-invent itself, and reimpose its global leadership (irrespective of how much sense it makes to understand this one variable, CO2, as the almost sole determinant for climate change).

Whether or not this transition serves Biden’s leadership ambitions is one thing. The main question is whether it will ‘save’ the global economy, or crash it (as Carney hints, might be a real possibility).

To get full access to the link in the article visit: www.strategic-culture.org