There is a lot of potential for flower cultivation in Bangladesh. 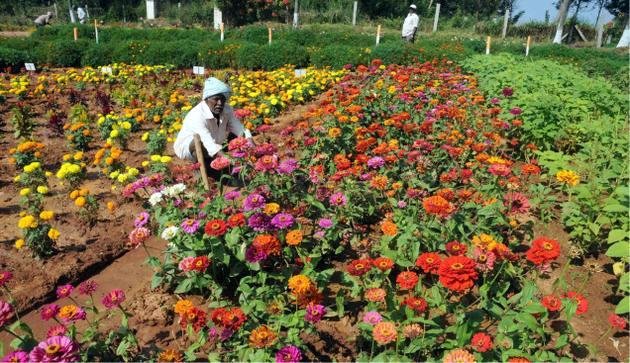 The economy of Bangladesh is mainly dependent on agriculture. As an economic sector, the contribution of the agricultural sector to the GDP at fixed prices was 14.23 percent in FY 2016-17, of which only the contribution of cereals and vegetables sub-sector was 7.51 percent. 40.72 percent of the total labor force of the country is engaged in agriculture (Economic Survey-2016).

In this age of free market economy, it is undeniable that the development of production capacity and production technology as well as marketing strategy to keep pace with the world. Therefore, good agricultural practices should be followed in the production of any crop. As well as safe lifting, processing and preservation is very important. In the existing market system, the price gap between farmers and consumers is widening. It is important to ensure direct access of farmers to the wholesale market through creation of market connectivity facilities and development of market management as well as fair access to farmers. It is also necessary to take various activities for the development of market management, product grading, washing, packaging and processing system through public-private partnership.

Commercial flower production in Bangladesh started in 1983 at Panisara village in Jhikargachha upazila of Jessore district. At present, flowers are being cultivated in about 5.65 hectares of land in 24 districts of Bangladesh (DAE 2016-17). About 1.50 lakh people are directly engaged in flower production and marketing. The use of flowers has multiplied as a result of the expansion of the flower industry.

The current market value of flowers in the world is about 40-50 billion dollars. But the country's contribution to global trade in this sector is only 3.5 percent. The global market value of flowers is expected to be around বিল 200 billion in the future. As the environment, climate and soil of Bangladesh are suitable for flower cultivation, this sector has huge potential. About 13 varieties of flowers are being produced in the country. Among them rose, tuberose, gerbera, marigold, gadiolus, gypsy, rodstick, calendula and chrysanthemum are being produced more.

On the other hand, about 5% of the total crop land of the country i.e. about 10% of the cultivable land is being used for vegetable production. This small amount of land is being used to meet the growing vegetable demand of a large population. Bangladesh ranks third in the world in vegetable production. According to the Department of Agricultural Extension, 26.17 lakh metric tons of vegetables have been produced from about 12.52 lakh hectares of land in the 2019-20 financial year. Besides, 123.89 lakh fruits have been produced from 6 lakh 29 thousand hectares of land. Although there are differences in the data and amount of vegetable based nutrition. For example, an average adult needs to take 200-300 grams daily. And taking only 100-16 grams. In that case the production of vegetables will have to be doubled more than at present.

About 100 varieties of vegetables are being produced in the country. There are about 1 crore 82 lakh farming families in our country. Almost every farming family is cultivating more or less vegetables. According to the United Nations Food and Agriculture Organization (FAO), vegetable production in Bangladesh has increased almost fivefold in the last 40 years. Bangladesh is exporting 50 varieties of vegetables to about 50 countries of the world by meeting the demand of the country. According to the Export Development Bureau, vegetables worth Tk 650.41 crore were exported in the 2016-17 financial year and the amount of exports is increasing every year. About 80% of the country's exported vegetables go to the Middle East and the remaining 40% to other countries, including Europe. There is a huge demand for Bangladeshi vegetables abroad. But entrepreneurs are only able to export 2-5 percent of the demand.