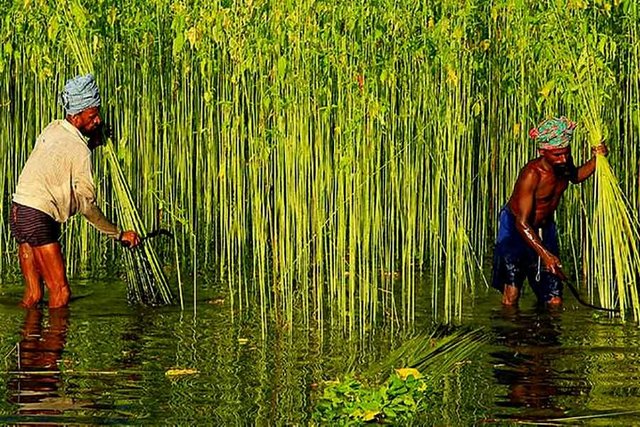 Jute is a traditional cash crop of Bangladesh. After independence, the export income of Bangladesh jute sector was 69.6 percent. At that time more foreign exchange was earned by exporting raw jute than jute products which created a golden age in the country's economy. This jute or jute fiber of Bengal is known as 'Golden Fiber' as a large amount of foreign currency was earned by exporting raw jute.
Although Bangladesh ranks 2nd in the world in jute production, it has occupied 1st place in exports. Jute cultivation is on the rise due to the love of Hon'ble Prime Minister Sheikh Hasina, the present agri-friendly government towards jute for maintaining the balance of the environment and the heritage of jute. In addition to jute, other fiber crops such as Kenaf, Hibischus cannabinus and Mestar (Hibischus sabdariffa) are cultivated in Bangladesh. In this country the cultivation of desi jute was more than that of Tosha jute which had a ratio of 20 কিন্তু 60, but now due to environmental and economic reasons the ratio is opposite i.e. Tosha ঃ desi = 60 ঃ 20. So far 26 desi jute (24 for fiber) by BJRI A total of 52 varieties have been developed, including 3 varieties for indigenous vegetables, 16 varieties of Toshapat, 4 varieties of Kenaf and 3 varieties of Mestar. At present, jute and jute fiber crops are cultivated in about 8-9 lakh hectares of land in the country from which about 85-90 lakh bales of jute. Jute contributes 1.4 per cent to the country's agricultural GDP, and the jute sector contributes 0.28 per cent to the GDP. Ter fibrous is composed of cellulose and lignin. By collecting this cellulose, ball sheets are invented in a kind of bio-grade which can be used as an alternative to polythene. In this bio-grade, a type of polythene bag known as ‘Sonalibag’ has been invented through advanced technology from ball plastic sheet. The inventor of this goldbag is the former director general of Bangladesh Atomic Energy Commission and scientific adviser of Bangladesh Jute Mills Corporation. Mubarak Ahmed. Hon'ble Prime Minister Sheikh Hasina has given the name 'Sonalibag'. Also, this scientist discovered jute (jute corrugated) from jute in a polymer mixture in 2009. Polythene bags made from plastic or polythene or polyethylene used in everyday work do not mix easily with soil. Its harmful elements remain in the soil for about 10-15 years which degrades soil fertility, degrades soil quality, adversely affects crop production, burns polythene and causes carbon dioxide and carbon monoxide to pollute the environment. Creates. On the other hand, jute fiber goldbags decompose easily after 4-5 months, act as fertilizer in the soil and do not cause any harmful effects on the environment. The gold bag can comfortably carry a variety of items including food and clothing. Polymer bags made of jute are one and a half times more durable and strong than ordinary polybags. These waterproof polybags are available at a lower price than polythene bags. Made using readily available materials and common technology, this goldbag has great potential for export. For this, it is necessary to increase the production of goldbags commercially and also to make a law for the use of goldbags by banning polythenebags in the market.