Last Sunday felt more like mid-February than mid-April. It was more cold than cool; the sky was heavy and gray. We are in confinement in France. No travel more than 10 km from home, a 7 PM curfew, no service at any restaurants, and virtually no entertainment. I didn’t want to, but I felt obliged to take my afternoon walk. I have passed the little cemetery in my town, Meudon, many times. On this day I entered and explored. This is what I found. 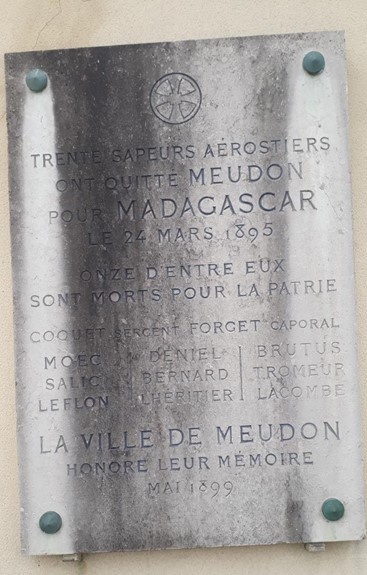 Just around the corner turning right at the entrance is a plaque for locals who had died in Madagascar in 1895. The plaque indicates that 30 aerostiers participated in the expedition (invasion) and nine died there. Madagascar was added to the French republican empire by this war and became independent in the 1960s. I imagine these aerostiers were part of the military airship program located just beyond the center of town, now in the Forest of Meudon. Today there is still the primary building called Hanger Y. After many years of disuse, Hanger Y is being transformed into a place for science exhibitions. 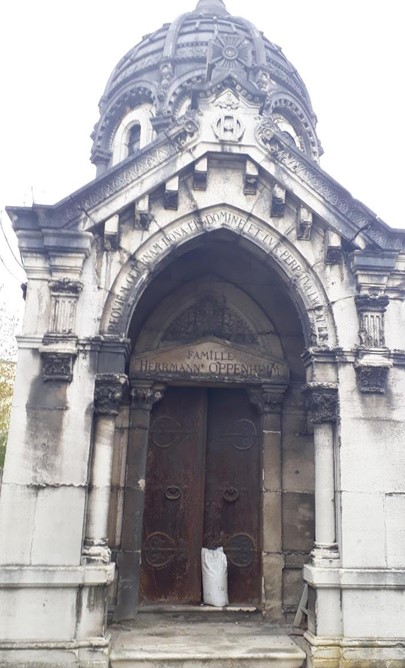 Turning left at the entrance is the largest monument in the cemetery that is also listed as a National Monument (designed by the architect Paul Déchard);  the mausoleum for the family of Hermann Oppenheim. Herrmann was a banker born in Germany but he does not appear on the Wikipedia page of the German Jewish banking Oppenhiem family. To have a sense of his business interests, two of his children were born in Istanbul and another in Cairo. Perhaps the most well known child was Marie Anne Béatrix Oppenheim; known after her aristocratic marriage as the Baroness Marie de Baye (1859-1928). She was a great socialite and poet. Another child, Robert Emmanuel Pacifique Oppenheim, is not buried in Meudon. In 1918 he slipped and fell on the ice on the roof terrace at the beautiful and elegant Hotel Le Marquis (now the Hotel Chandler) in New YorK. But I like his name, this photo, and his interesting death so include him here.

La République, was an airship, or dirigible, used by the French military for reconnaissance and based in Meudon. Its final flight was 25 September 1909 when the engine failed and it crashed, killing the four-man crew.

I found nothing about the brothers Boudet beyond what is written on the memorial; all three were dead in the first 14 months of WWI.

René Leduc was a great hero of the French Resistance during WWII. He was captured and tortured by the Gestapo in 1943. He then suffered in several concentration camps until the end of the war. After the war Leduc went into politics. He was the long serving mayor of Meudon from 1947 to 1971. The major sports complex in the town is named after him.

The Name of a Rose

General Jean-François Jacqueminot made his name fighting with Napoleon from Austerlitz (1805), to the retreat from Moscow at Berezina (1812), and finally to Waterloo (1815). After a short stint in prison he had a business, political and military career that ended with his indecision as the head of the Guards during the revolution of 1848. During his retirement the gardiner Rousselet named a red rose ‘Général Jacqueminot’ in his honor. This rose became very popular and was the most commonly cultivated red variety worldwide for about fifty years.

The most original monument in the cemetery was for the family of the archeologist Jean-Baptiste Piketty. It consists of megalithic stones,originally from Dolmen de Ker-Han (Saint Philibert, Morbihan) and transported by train in 1896 and reassembled in the cemetery to create the tomb. These are examples of the famous megalithic stones of Carnac in Morbihan that are a major tourist attraction in France.

Note the sign next to this grave that M. Guiot was in the reserves for the 2e brigade blindée.  I don’t know if this is precisely the same as the legendary 2eme division blindée but it reminded me of the same nonetheless.

Is Paris Burning? is the name of a book and monumental film about the liberation of Paris in August 1944? A key part of the story is General Leclerc and his 2nd armoured division. The route they took is now marked by monuments, like the crazy looking turret of a Sherman tank, through the towns and suburbs to the west and south of the city. And still today there exist bullet holes in buildings along Ave du General Leclerc from the Port d’Orléans entering Paris, continuing onto the Ave St. Michel to the Seine.

I actually was looking for the graves of the two most famous of the interred, the writer Louis Ferdinand Celine and the organist Marcel Dupré. Even though the cemetery is rather small (100mx100m) I never found Celine or Dupré. I have written about the patrimony of Dupré before. Celine is a fascinating character that perhaps I will address

There are small pleasures to find and cherish that are especially worthwhile in these somber days. My walk through the cemetery of Meudon was one of them.