Considering the ‘Covid’ Lie: This Is No time for Diplomacy, It Is a Time for Truth

“Every normal man must be tempted, at times, to spit on his hands, hoist the black flag, and begin slitting throats.”

While diplomacy may be thought of as a noble act, it rarely works, and even less so concerning any collective effort. In addition, it can never be achieved when dealing with any governing body. Diplomacy is meant for individuals in order to structure cooperation and calm in daily life, commerce, and society. Nation states can only attempt to be diplomatic if the people themselves fully agree with the terms. This is never the case. Diplomacy by representative proxy therefore, while seemingly possible, is not, as all individual parties must first agree, and continue to do so for any so-called intended diplomatic result to occur. Regardless, diplomacy is nothing more than concession, and therefore useless in any effort to accomplish anything of value. 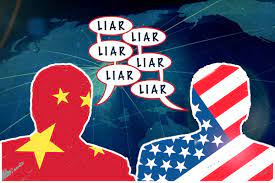 Concerning the current environment and tyrannical chaos evident, diplomacy is not only irrelevant; it is worthless. I am no diplomat, and no longer have sympathy for those that choose to remain blind in the face of this obvious and purposely planned and initiated totalitarian hell. The holes in this ‘pandemic’ fraud are large enough for trucks to drive through, so acceptance of the state’s narrative is no longer valid in any way. At this point, all that matters is the truth, and an acceptance of that truth in order to be able to recognize reality. This in essence is the psychological basis for sanity, and the foundation of character. Gaining an understanding of this premise can only lead to a better life and confidence in making the right decisions. How much indisputable evidence and tyranny must be present before the herd is willing to not only listen to the truth, but also accept it?

The requirements for this awakening can be harsh, but are necessary in order to survive unscathed. Avoidance of the truth leads to a dishonest response of diplomacy and compliance in order to “get along.” This can only lead to widespread submission and an inability to face any challenge. This country’s inhabitants are now consumed by ignorance due to long-term mass indoctrination, and have become unable to distinguish truth from lies, fact from fiction, and reality from fantasy. Because of this purposely-created phenomenon, honesty and courage have virtually disappeared, and have been replaced with cowardice and indifference. This has led to what might be described as gross intellectual obsolescence of the majority.

It has been reported often that there are many people in this country that do not believe in masks or social distancing, or any of the other draconian and freedom robbing mandates that have been issued, but do them anyway in order to be respectful of others, or to show some pretended empathy or compassion. This is pure poppycock, and is a barefaced lie. If any of these people actually do not believe that what they are doing is right, but are doing it anyway, they are simply seeking an excuse for their cowardice. They do not want to buck their master nor do they desire to have any conflict, so they practice a form of false diplomacy. In other words, they do as they are told and pretend that they have some noble purpose. To consider the consequences of doing right in order to decide to go ahead or stand against wrong, then right has already been discarded in favor of submission. This is a pathetic response, and one that is prevalent in the majority of Americans today.

The situation we are faced with is not only dire; it is life changing and could be life ending. Certainly all freedom is threatened, private property is being confiscated due to intentional economic destruction, medical tyranny is rampant, self-imprisonment has been mandated and will be again, poverty is widespread, poisonous injections and Communist Block type identification papers are required in some areas in order to work or travel, and hyper inflation has already begun. This is serious business, and this weak and apathetic populace has voluntarily accepted all of this totalitarian madness with little if any resistance.

There is much talk about the necessity for Americans to wake up, but that has not happened. In light of the preponderance of evidence concerning the fraudulent nature of this so-called pandemic and “Great Reset,” why has a mass awakening not occurred? It has not occurred because most of the people of this country are now happy with their slavery, and are not willing to take any risk whatsoever to protect their own freedom. This is the current state of affairs, so what is to be done?

No one has a right to force or attempt to force another to take any position whatsoever. In other words, you as an individual have no right to force your beliefs on others in society, regardless of the merits of your thinking. This means of course, that no other has any right to force you to do anything against your will as well. So what does this mean?

It means that those of us willing to stand up against the controlling powers and the state should not bow to any authority or any individual or group attempting to harass, threaten, shame, or intimidate us in any way. Diplomacy be damned, as it is high time to quit attempting to sympathize with idiots. “I’m as mad as hell, and I am not going to take it anymore” is the position that seems most prudent as we enter this final stage of this takeover plot.

Quit pretending that you are wearing a mask for the benefit of others. Quit allowing non-thinking, obnoxious drones from attacking you. Quit running away from those attempting to force their position on you. Quit going along to get along. Quit succumbing to pressure from others to do things you know are not in your best interest. Quit calculating every decision and move you make based on the consequences, and just do what you know to be the right thing. Live you own life your way without concern for those refusing to stand up against tyranny.

“He who joyfully marches to music rank and file has already earned my contempt. He has been given a large brain by mistake, since for him the spinal cord would surely suffice. This disgrace to civilization should be done away with at once.”