The river of the same name that pushes billions of gallons of water into the lake each rainy season is gone. The lake, which expands and contracts like a heart beating twice a year for millennia, barely spills across its dry season borders. "We don't see the water rising like before," said Kheav Cheam, a 50-year-old fisherman. «. In Cambodia, fish is the main source of protein for 80% of the population. Cheam, who lived with his family on a small boat they traveled between rivers and lakes, had survived out of the water throughout his adult life. "We were afraid that the people living in the upper section had closed the dam, so we were growing in despair». 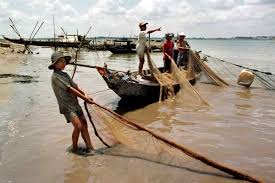 Usually, the reversal lasts 160 days and causes 38.37 cubic kilometers of water to overflow into the lake, according to a two-decade average collected by the Mekong River Commission, an intergovernmental body aimed at joint river management...
An MRC report published in late September showed a staggering drop. During July, August, and September, the lake reached a quarter of its normal capacity. Kim Rai lives on the Mekong River in Kampong Cham, about 30 km from the capital Phnom Penh. The past five years have been the warmest on record and repeated El Nino weather conditions have resulted in devastating droughts in Southeast Asia. Since the 1990s, a series of hydroelectric dams have been built on the Mekong and its tributaries. Last year, the Mekong hit its lowest level ever.
This year it was barely higher.