They’re Not Even Trying to Make Sense Now

The US intelligence community published a report on 10 March, widely reported in the US free speech news media, on foreign interference in the US election (how many oxymorons so far?). The report establishes a new level of idiocy on the long-running “Russiagate” nonsense.

The idiocy began when Trump, campaigning, remarked that it would be better to get along with Russia than not. A sentiment that would not have surprised Presidents Eisenhower, Kennedy, Nixon, Reagan or any of the others who recognised that, like it or not, Moscow was a fact. A fact that had to be dealt with, talked to, negotiated with so as to produce the best possible result. Why? Well, apart from the diplomatic reality that it is better to get on with your neighbours, the fact that the USSR/Russia was a nuclear power that could obliterate the USA was adequate reason to keep communications alive. If relations could be improved, all earlier US Presidents would agree, so much the better. But for Trump – the outsider – to dare to say so was an outrage. Or more accurately, a hook on which to hang enough simulated outrage to cost him the election. Then, upsetting all expectations, he won. Immediately pussy hat protests, blather about tax returns, Electoral College speculations, 25th Amendment, psychiatrists opining unfitness (COVFEFE: Bizarre Trump Behavior Raises More Mental Health Questions): an entire industry was created to get Trump out, or, if he couldn’t be got out, then at least prevented from doing any of the things he campaigned on. All the swamp creatures were mobilised. The most enduring of these efforts was the Russia allegation. A Special Counsel was created to investigate Russia, Trump and the election. Leaks from this and other investigations fuelled outrage and talk shows. 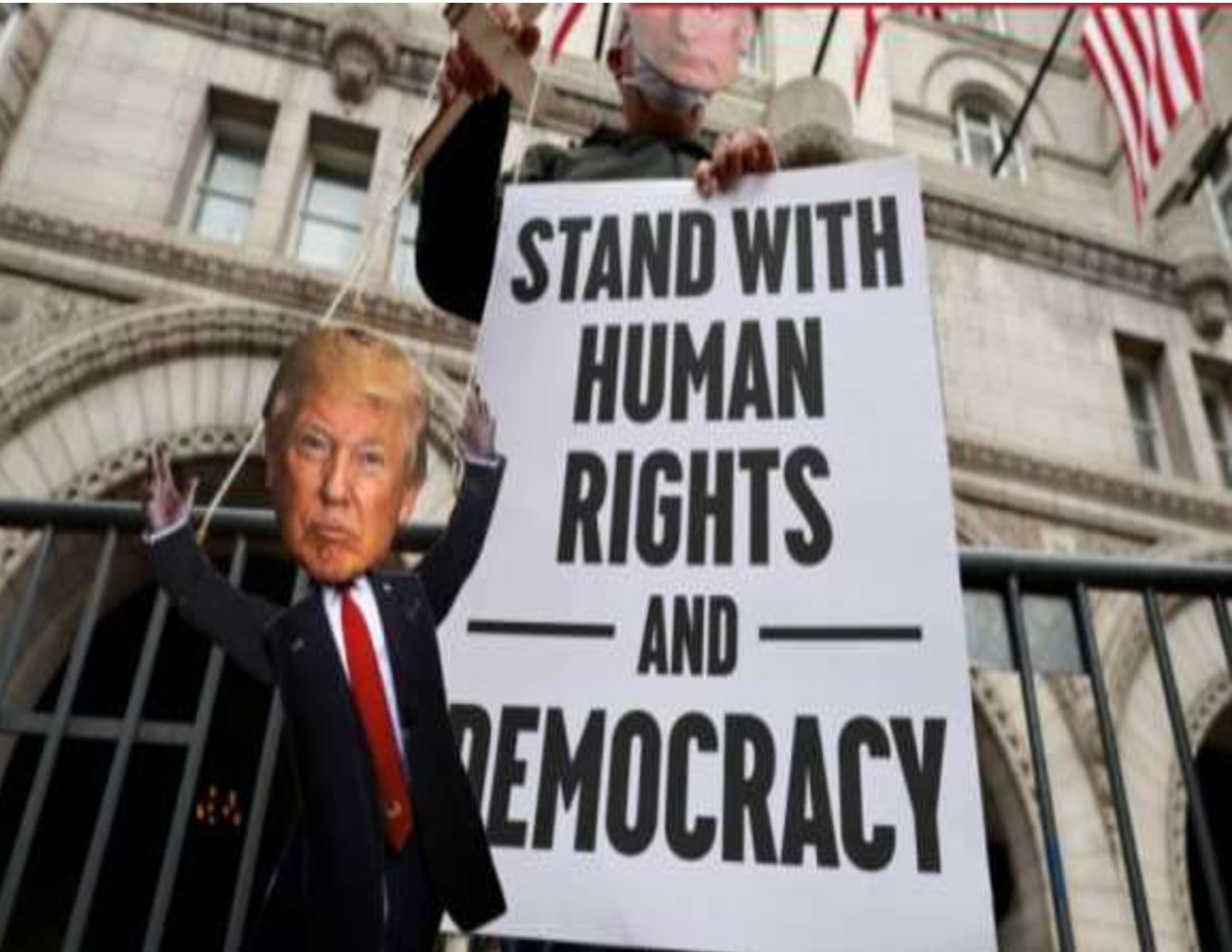 One of the indications that the story was actually an information operation and not based on fact was its imprecision. Was Trump merely too friendly with Putin, or was he his puppet? Was Trump just a fool to think that relations with Russia could be improved, or was he following instructions? In short, was he a dupe or a traitor? How exactly had Russia interfered in the election and to what effect? Had a few voters been influenced or had the result been completely determined by Moscow? In short was Moscow running the USA or just trying to? Proponents of these crackpot theories never quite specified what they were talking about – it was all suggestion, innuendo, rumours and promises of future devastating revelations. Some of the highlights of the campaign: Keith Olberman shouting Russian scum! Morgan Freeman solemnly intoning that we were at war, and, night after night, Rachel Maddow spewing conspiracies. Some media headlines: Opinion: Here are 18 reasons Trump could be a Russian asset. Trump is ‘owned by Putin’ and has been ‘laundering money’ for Russians, claims MSNBC’s Donny Deutsch. Mueller’s Report Shows All The Ways Russia Interfered In 2016 Presidential Election. A media firestorm as Trump seems to side with Putin over US intelligence. Trump and Putin, closer than ever. All signs point the same way: Vladimir Putin has compromising information on Donald Trump. And so on. Four years of non-stop nonsense promising, tomorrow, or the next day, the final revelation that would disgrace Trump and rid the country of him forever: my personal favourite is this mashup of TV hairstyles telling us that the walls were closing in. Information war. Propaganda. Fake news.

All this despite the fact that the story as presented simply made no sense at all. As I pointed out in December 2017, if Moscow had wanted to nobble Clinton, it had far more potent weapons at its disposal than a too-late revelation of finagling inside the DNC.

And it wasn’t just TV talking heads; the US intelligence community participated. There were two laughable “intelligence assessments”. The DHS/FBI report of 29 December 2016 carried this stunning disclaimer:

This report is provided “as is” for informational purposes only. The Department of Homeland Security (DHS) does not provide any warranties of any kind regarding any information contained within.

The DNI report of 6 January 2017 devoted nearly half its space to a four-year-old rant about RT and admitted that the one Agency that would really know had only “moderate confidence”. In short: ignore the first report, and don’t take the second one seriously. Were people inside these organisations trying to tell us it was all phoney? No matter, the anti-Trump conspiracy shrieked out the reports immediately.

One by one, it fell apart. Mueller, despite the prayer candles, came up with nothing. The “Dirty Dossier” was a fraud. The impeachment for something that Biden actually did failed. These dates should be remembered – Crowdstrike CEO Shawn Henry told the House committee that he had no evidence on 5 December 2017; this classified testimony was not made public until 7 May 2020. Simply put: the key allegation, the trigger for all the excitement and investigations that followed, was a lie, many people knew it was a lie, the lie was kept secret for 884 days. But the lie served its purpose.

There were no investigations of this fraud, only pseudo investigations that went nowhere. When the Republicans had a majority on the House of Representatives there were serious investigations but the testimonies – like Henry’s – were kept secret because they were “classified”. When the Democrats gained control, there were continual boasts that the evidence of collusion was overwhelming, but nothing happened either. Trump’s first Attorney General recused himself and the investigation was conducted by the conspirators. His second Attorney General promised much, set up a Special Counsel, but nothing happened. Well, not quite nothing: a junior conspirator had his knuckles rapped for faking a FISA warrant. In short, the Deep State ran the clock out: the swamp drained Trump.

Ran it out quite successfully too: relations with Russia got worse and Trump himself was hamstrung. His orders were ignored everywhere: on investigating the conspiracy and on removing troops; here’s an insider telling us that the Pentagon ignored his orders on Afghanistan. He was stonewalled on Syria: “We were always playing shell games to not make clear to our leadership how many troops we had there.” The “most powerful man in the world” was blocked on almost every initiative and the long false Russia connection story was a powerful weapon in the conspiracy to impede his attempts to change course.

In 2021 Trump left office and there was no need to mention any of it again. But here’s where it gets really stupid. In December 2020, the NYT solemnly told us: Russian Hackers Broke Into Federal Agencies, U.S. Officials Suspect: In one of the most sophisticated and perhaps largest hacks in more than five years, email systems were breached at the Treasury and Commerce Departments. Other breaches are under investigation. At the same time we were equally solemnly told by US officials “The November 3rd election was the most secure in American history”.

In short, we are supposed to believe that

in 2016 the Russian hacked nothing but the election

and in 2020 they hacked everything but the election.

How stupid do they think we are? Even stupider evidently. Instead of retiring the Trump/Russia/collusion/interference nonsense when it had achieved its purpose, the Intelligence Community Assessment on Foreign Threats to the 2020 US Federal Elections takes us right back down the rabbit hole. I haven’t read it and certainly don’t intend to (see oxymoron above), but Matt Taibbi has and eviscerates it here; he’s read far enough to have mined this gem “Judgments are not intended to imply that we have proof that shows something to be a fact”. (Is this a hint from insiders that it’s all fake?) The report claims that Putin authorised, and various Russian government entities conducted, a campaign to denigrate Biden. Specifically by using Ukrainian sources to talk about corruption of Biden and his son Hunter; despite the video of Biden boasting about firing the investigator, we’re assured that this is all disinformation. And the consumers of the NYT and CNN will believe what they were told. Or, actually, will believe what they weren’t told: the media kept quiet. (Now that’s interference and interference that actually might have changed votes.) The report goes on to say that China did something or other and Iran, Hezbollah, Cuba and Venezuela also chipped in. But fortunately no foreign actor did anything to affect the technical part of the election.

The US security organs expect us to believe,

that there was lots of malign activity

which had no effect on the election whatsoever.

Which is telling us they think we’re even stupider. Russia swung the election four years ago but forgot how to this time? Putin’s attempt to keep Trump in was blocked by security measures adopted when his tool was President? This time Putin wanted Biden in? Russia’s efforts on behalf of Trump were countered by China’s on behalf of Biden and Iran’s interference broke the tie? But then, information operations don’t have to make sense, they just have to create an impression: Russia, China, Iran and Venezuela do bad things to good people.

Oh, and the latest is that Moscow cultivated Trump for over 40 years, Imagine that: in 1980 they were so perceptive as to see the future importance of a property developer; who’ve they got lined up in the wings now? And Rachel Maddow is back at the old stand pushing some conspiracy theory about Trump, Putin and COVID. I guess it’s not yet time to put away the tinfoil hats.

As I have said before, English needs a whole new set of words for the concept “stupid”: the old ones just don’t have the power any more.