Trying to ban racial profiling essentially means that via bureaucracy we want to punish people for an unfair decision making process that they make in their subconscious minds. 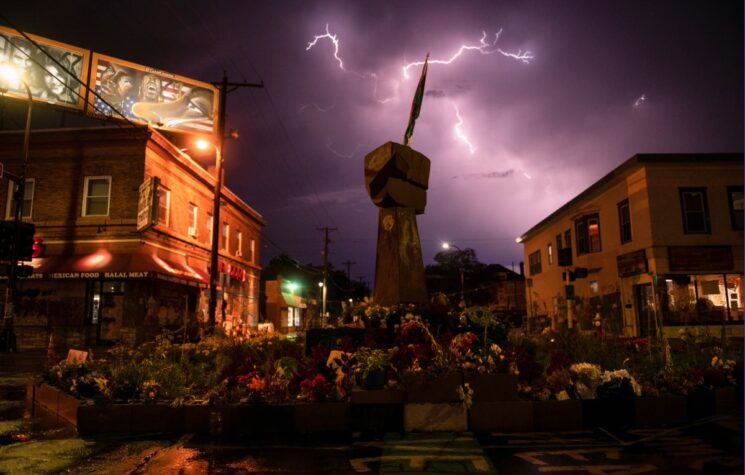 There was a time in American history when the media seemed a lot more subtle in its filtering of ideas. Certainly the blunt advertising of the 1950’s is primitive by today’s standards of subtle product placement and “native” advertising that surround our subconscious on all fronts. But the news media has gone in the opposite direction, becoming so bluntly biased that it is like watching those Disney/Warner Bros. animated propaganda reels from the 1940’s. Today’s “case in point” is CNN’s in-your-face interpretation of the conviction of the police officer that snuffed out the life of George Floyd while he was already handcuffed.

We should not forget that no matter what sort of person Floyd was he could only be rightfully executed after being convicted by an impartial jury during a fair trial with legal representation. The American system was designed specifically not to allow “Judge Dredd” style police work. So Floyd “the man” is not relevant to this discussion, but what is, is CNN’s exploitation of his corpse. The first two sentences of their article are as follows…

“The conviction of Derek Chauvin showed George Floyd’s life really did matter to a justice system on trial.

Now, millions of Americans wait to see whether a moment of rare hope will spur political leaders to deliver similar justice by reforming policing and eradicating systemic racism.”

Firstly, although perhaps taking into account the value of life would be a benefit to court hearings, this verdict only proves that there was enough evidence to convict the police officer in question of murdering a helpless suspect in custody. It proves that he is “guilty beyond a reasonable doubt”. The author of this piece either purposely or by instinct has framed the idea of this trial for the reader so that the results are a reflection of the emotions of the state towards the death of Floyd and not a reflection of evidence and

due process. This interpretation makes it look like court decisions come as a gesture of grace from the Emperor rather than the result of pieces of proof convincing a jury one way or another.

The second bit about having “a rare moment of hope” for “eradicating systemic racism” is just as manipulative. It is true that for some mysterious reason political change always requires a catalyst. Politicians simply cannot put up a new street light on a dangerous intersection until someone gets splattered by an SUV. So perhaps the convection could be a catalyst, but it is a weak one. If the court system is capable of imprisoning police who grossly violate their code of conduct then that sort of proves that the system would seem to be working. Furthermore, the fiery Black Lives Matter protests are a much more volatile and effective as a catalyst than punishing someone that most of the country has already forgotten about. Moments of hope are indeed rare but usually follow a major political victory or a supreme court decision, not so much throwing one bad cop (of the many out there) in jail.

But the real icing on the absurdity cake is the idea, hinted at by CNN, is that now thanks to passing some new beefy legislation, that few have fully read, filled with minor nuances and tweaks by people who have mostly never worked in law enforcement, can and and somehow shall end “systemic racism”.

In a country that guarantees equality for all under the law in its Constitution as well as provided all sorts of benefits to minorities, diversity quotas, scholarships for the under-represented and the like, it seems that if there is systemic racism at the core of today’s American government, then it is doing a garbage job of realizing Hitler’s vision for the Aryan future, especially those two electoral victories under Obama’s belt.
Again, according to CNN the amazing Democrat solution of the day that needs to be trumpeted looks something like this.

“The method for making the most fundamental set of changes to policing in a generation, the George Floyd Justice in Policing Act, is already sitting in the Senate. Democrats say it would end racial and religious profiling, ban chokeholds on suspects, eliminate no-knock warrants on drugs cases, make it easier to prosecute offending police officers and would overhaul police training to build trust with the communities in which officers serve. Yet its path is challenging given the opposition of many Republicans to the concept of Washington establishing federal standards for police.”

This again goes back to the classic logic followed by far too many people the world over, that if you “ban X via law, then X will go away forever”. For the average global peasantry this makes sense, most of us are afraid of the police and will do what the lords in fancy suits tell us to do. So if we order Joe Average that X, Y and Z are now illegal statistically he is likely to just accept it and not engage in those acts even if he thinks the ban is wrong. The problem is that it certainly doesn’t make X, Y and Z go away forerver as some people simply do not care about risks and others may be motivated to engage in them anyways or they are part of human nature which cannot be banned. No matter how many times we make murder illegal it still seems to happen, but there are certainly ways to reduce its number of occurances per year. Things like “racial profiling” fall into this category of things that are frowned upon but will never be eradicated by legislation.

Trying to ban racial profiling essentially means that via bureaucracy we want to punish people for an unfair decision making process that they make in their subconscious minds. Very few policemen are going to go out thinking consciously “I’m going to be racist today” but they certainly work and make many decisions based on their instincts which have a whole array of built up biases, some of which are fair and reasonable, some of which are not.

You cannot ban a form of “intuition” that does not suit your bizarre My Little Pony political worldview. This bureaucratic step means that logically any subject, arrested by an officer of a different race could argue that due to a procedural error of racial profiling they should be let off the hook. People get off the hook based on technicalities all the time, which is again an inherent part of the American system. If the police screw up – you go free, even if you are probably guilty. Now every action of the police that gently scrapes racial lines could become a “technicality”.

Although it may be a matter of personal intuition, this crackdown on profiling seems like an extension of the “Defund the Police” logic. However this is more of a “Scare the Police into Inaction” technique, which makes for an effective strategy but a bad bumper sticker.

Now, of this proposed legislation, the concrete tactical aspects of it do seem like a positive step. A choke-hold is a concrete hand-to-hand combat tactic, no-knock warrants are also a tactic, these can in theory be “banned”, but bans only work if the police are being constantly videotaped and those recording have the ability to use the video as evidence. We could certainly go down a “Whataboutism” rabbit hole asking why the police now cannot choke someone, yet they have been starting to use all sorts of APC like vehicles and brutal crowd control methods in recent years that seem obviously heavy-handed, but we can leave that discussion for another day.

The key issue is that if bureaucracy could solve the animosity between the Police and Black America then these issues would have been over by the end of the 60’s. The fundamental problems are of an economic and ideological nature. Biden and friends can throw as much long-winded legislation at the wall as they want, but they can’t and haven’t made it stick. No amount of CNN spin can cause this horrible approach to government to become effective. If this is the culmination of the massive protests after the death of George Floyd then they were completely in vain. Washington has put another cheap patch on the leaking dam.