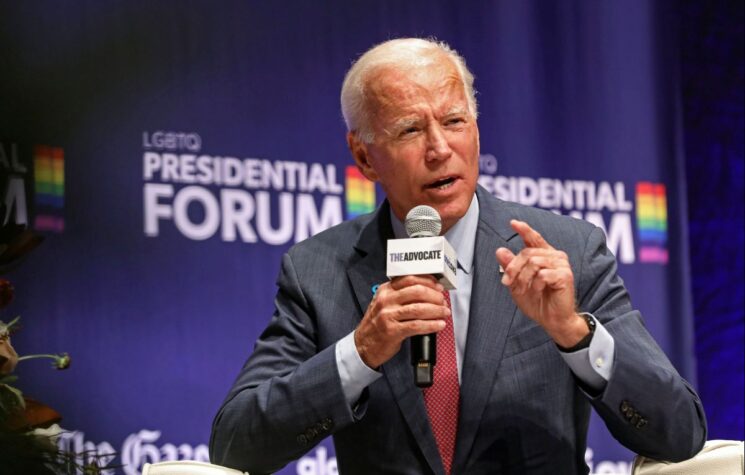 In much the same way the American people inherited the freedom-killing Patriot Act in the immediate aftermath of 9/11 and subsequent anthrax attacks, they have now inherited a wholly un-American social, cultural and political woke consensus following the ‘terrorist’ attacks on the Capitol building on January 6th.

Of the many executives orders Biden drafted into law without an ounce of democratic oversight on his locked-down inaugural day, none carry more power to radically alter the intrinsic character of the nation than the one entitled, “Executive Order On Advancing Racial Equity and Support for Underserved Communities Through the Federal Government.”

While the opening sentence begins with a comfortably mind-numbing platitude (“Equal opportunity is the bedrock of American democracy, and our diversity is one of our country’s greatest strengths”), by the end of the paragraph (“Our Nation deserves an ambitious whole-of-government equity agenda that matches the scale of the opportunities and challenges that we face”) it is clear that dearly detached leader, with the help of the radical progressive apparatchiks, is dragging the republic deep into unchartered waters.

Much of the problem with this order comes from the term ‘equity,’ which is mentioned no less than 20 times. Here is one sample: “Because advancing EQUITY requires a systematic approach to embedding fairness in decision-making processes, executive departments and agencies… must recognize and work to redress inequities in their policies and programs that serve as barriers to equal opportunity.”

The EO provides its own lengthy definition of the term, which only serves to further muddy the waters. Equity, it states, is “the consistent and systematic fair, just, and impartial treatment of all individuals, including individuals who belong to underserved communities that have been denied such treatment, such as Black, Latino, and Indigenous and Native American persons, Asian Americans and Pacific Islanders and other persons of color; members of religious minorities; lesbian, gay, bisexual, transgender, and queer (LGBTQ+) persons; persons with disabilities; persons who live in rural areas; and persons otherwise adversely affected by persistent poverty or inequality.”

Does that help to clear up matters? Not remotely. After all, anytime anyone starts throwing around vague and ambiguous terms like ’fairness,’ ‘ freedom’ and ‘just’ – concepts that have confounded the greatest philosophic minds since the days of Socrates – then it’s safe to say you’re heading for trouble. Moreover, is it just pure coincidence that Biden’s EO just happens to mention every single disenfranchised minority group that the Democrats – who played no small role in disenfranchising these people to begin with – desperately want to sign up to their party? Although the same could be said for the Republicans, conservatives are not rushing to open the Mexican border to illegal migrants, nor are they monkeying around with gender and identity politics for the sake of securing a new voter niche. But I digress.

So to better understand the term, it may be easier to say what equity isn’t. Equity is not a system built on the bedrock of personal merit, distinction and achievement where the most qualified naturally rise to the top in any field of endeavor. The metaphorical ‘cream of the crop,’ as it were. Nor does equity, in its current frame of reference, that is, within a society that actively promotes critical race theory, an unproven concept that says white people are born into the world carrying the original sin of racism, protect those individuals who currently enjoy their current status due to hard work and determination.

To see Joe Biden’s ‘equity’ at work, Americans need to look no further than corporate America, whose main concern is no longer about providing the best service or product, but rather actively promoting its woke values in a world gone mad. Take United Airlines, for example. Somehow this major airline carrier believes that the heavy presence of white, male pilots inside of their cockpits is a trend that must somehow be corrected to “reflect the diversity of our airline passengers flying on our planes.”

Was anyone aware that the airline industry has a secret clause that forbids women and minorities from learning to fly aircraft, which oftentimes occurs in the military, incidentally, where candidates must meet strict requirements? Neither did I. Thus, the distinct lack of estrogen and melanin in the cockpit can only be explained by those invisible bogeymen known as ‘white privilege’ and ‘system racism’ that explains everything wrong with American society precisely because they explain nothing.

Incidentally, the fact that any company has the ability to risk such a foolhardy campaign based on the dynamics of crude racism, which could trigger consumer aversion and even boycotts, shows the company is probably too powerful, even monopolistic, and could do with some serious government regulation. But such bold action would require a government blessed with politicians who are not in bed with corporate interests like cheap prostitutes, which is, tragically, not the case with America. Again, I digress.

No longer concerned about getting a commercial aircraft loaded with passengers safely from Point A to Point B, United Airlines is now committed to making ‘Diversity, Equity and Inclusion’ “part of our DNA.” Moreover, according to their website, the new agenda is all about “creating a more diverse, equitable and inclusive culture where all employees feel safe to be their authentic selves…”

But what does that even mean, “feel safe to be their authentic selves?” Was there ever a case when a female or a minority member of society felt the least bit threatened because they had a dream to pilot aircraft? Personally, I cannot imagine it. Again, the unspoken yet obvious reference here is that ‘white privilege’ and ‘systemic racism’ is somehow to blame for the current makeup of airline pilots. Yet had United Airlines taken the time to consider the most egalitarian societies in the world, like Finland, Norway and Sweden, they would have discovered something known as the “gender equality paradox” which has demonstrated that, although minorities possess all the intellectual ability to perform well in the fields of science, technology, engineering and mathematics (STEM), they tend to steer away from these disciplines.

In other words, instead of alluding to some sort of white menace or ‘supremacy’ lurking inside of America’s cockpits, the real issue may simply be that women, and possibly other minority groups, including blacks, may simply not find as much joy in flying aircraft as white men seem to. That is not a proven thesis, of course; however it is a much fairer and reasonable explanation for the disparity than to automatically assume that ‘white privilege’ is to blame for the discrepancy.

In short, corporate America must resist the temptation to subscribe to inherently racist critical race theory for adjusting its sails to a radically different historical period. While they may arrogantly believe they are too powerful and influential to suffer a consumer backlash or boycott that is yet another theory they may not wish to test.