In London, a Kangaroo Court Ambush Is Being Set for China

Xinjiang is seen in a pivotal strategic role on the Great Chessboard. That most certainly is not because of possible human rights abuses that might be occurring there, if indeed they are, but for entirely different, hard-nosed geopolitical reasons.

An impudent farce vaguely shrouded in pseudo legal garb is due to be staged on 4th – 7th June 2021 at Church House, in London. A so-called “Uyghur Tribunal” will be convened there to deliberate on the danger of imminent extinction allegedly threatening the Uyghur Muslim minority ethnic group in China’s Xinjiang province. For the geographically challenged, Xinjiang (or Sinkiang in more common transcription) is the westernmost region of China. That is important, and relevant to this topic, because Xinjiang happens to be the most convenient land route corridor which China’s Belt and Road Initiative must inevitably employ if it is to be viable. Accordingly, make Xinjiang a sufficiently hazardous place and for all practical purposes B&R trade goes up in smoke. Chinese products cannot reach their foreign destinations, and neither can the products of foreign partners be reliably delivered to the Chinese market. 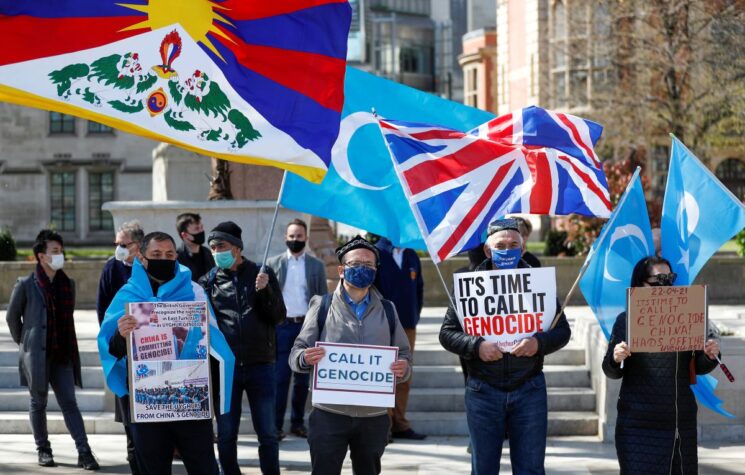 Even from a superficial, layman’s point of view Xinjiang is seen, therefore, in a pivotal strategic role on the Great Chessboard. That most certainly is not because of possible human rights abuses that might be occurring there, if indeed they are, but for entirely different, hard-nosed geopolitical reasons. Indeed, Xinjiang plays a far more strategically prominent role today than could have been contemplated even by Brzezinski in 1997, when his famous book was published.

The way it works was explained by Russian geopolitical analyst K. Gadzhiev of the Primakov National Research Institute who cogently argues that “the revival of Russia as a strong military and political power capable to defend its national interests, the emergence of powerful new actors such as China, the weakening of geopolitical positions of the West in general and the U.S. in particular, their defeat in aggressive wars and other failures have led to deep cracks in the conventional Grand Chessboard, which have brought about changes in both the line-up of the leading players and the rules of the game on it.” Gadziev further argues that even though combined Western power has seriously frayed, it would be unreasonable to expect it to “simply … give up the protection of their interests in Eurasia as a whole, and particularly in Central Asia.”

Thwarting any projection of Chinese power and influence that could be deemed threatening and retaining and enhancing the power and influence of the Western coalition, viewed as a zero-sum-game, is therefore the context in which the intensification of efforts to destabilise China should be viewed. The sudden obsession with human rights issues, specifically in the strategically positioned region of Xinjiang, is either completely coincidental or it is an important element of that very destabilisation campaign.

But to return to the “Uyghur Tribunal,” which is a very important facet of the just described picture. It was set up in 2020 in the United Kingdom, on the cusp of the publicity campaign designed to enhance a public perception of the allegedly grave human rights situation in Xinjiang. The “Tribunal’s” task now is to make the transition in the public mind from routine charges of “human rights violation,” always useful for exerting diplomatic pressure on the targeted government, to the substantively new level of “genocide,” with more serious legal, political, and moral implications.

According to information available on the Tribunal website, the initial step toward Uyghur Tribunal’s formation was taken in June 2020 by Dolkun Isa, President of the World Uyghur Congress, an organization of faux Uyghur émigrés with close ties to the Western, primarily U.S., political and security establishment. (See NED Grants Database site for an itemised schedule of financial support to WUC totalling $1,284,000. For the many interlocking organisations which constitute the “Uyghur diaspora” under the patronage of Western agencies, and the individuals most prominently involved in it, both Uyghur and their non-Uyghur overseers, credible and thoroughly researched sources of information are available here and here.) The official account has it that Isa turned to Geoffrey Nice QC, Hague Tribunal (ICTY) prosecutor in the case of former Yugoslav President Slobodan Milošević, with a request to „establish and chair an independent people’s tribunal to investigate ‘ongoing atrocities and possible Genocide’ against the Uyghurs, Kazakhs and other Turkic Muslim Populations.“ Accordingly, „[t]he Uyghur Tribunal was launched on 3 September 2020 with assistance from a non-governmental organisation, the Coalition for Genocide Response.“

The engagement of Geoffrey Nice to supervise this operation is of considerable symbolic significance because of his close association with the Yugoslav Tribunal in the Hague. That in turn triggers associations with that Tribunal’s principal task, which was to legally validate the alleged Srebrenica Genocide and personally inculpate the head of the Yugoslav state at the time in that and numerous other imputed serious violations of international law. It should be borne in mind that one of the specific named targets of the consortium of organisations, all masquerading as NGOs, which are advocating legal proceedings against China over the Uyghur Question, is President Xi himself, in a clear analogy to Milošević.

There are numerous oddities about the Uyghur Tribunal, of which it suffices to mention just two.

First, the entity described, using deliberately misleading legal terminology, as a „Tribunal“ was in fact „constituted as a UK Private Company Limited by Guarantee – under the name ‘Uyghur Administration Ltd’“. That means that it is a private citizens’ association without any official standing whatsoever within the judicial system of the United Kingdom. The juridical status of the „Uyghur Tribunal“ is therefore null. The conclusions it draws and „verdicts“ it issues are completely non-binding and technically unenforceable. Since it misrepresents itself as a „Tribunal,“ not being a proper court it lacks the requisite authority to make its judgements heeded, except to the extent that through manipulative political and mediatic mechanisms a perception should have been created that they ought to be.

The second significant anomaly of the „Uyghur Tribunal“ is that it apparently lacks a governing document (known as the Statute in the case of the Hague Tribunal) as well as, even more importantly, Rules of procedure and evidence. These are practical roadmaps without which no actual or pretended „tribunal“ is even conceivable.

The lack of procedure and evidence rules means that there are no set guidelines for the conduct of UT’s essential business. Since the conclusions the panel will ultimately draw supposedly will have been based on the “evidence” put before it, the lack of rules governing admission and assessment of evidence seriously impairs the integrity of the entire process.

It is a mystery how Geoffrey Nice QC, touted on the Uyghur Tribunal website as a „prominent barrister,“ could have overlooked these obvious defects and still have agreed to head such an outfit. Regardless, it is fair to say that the “Uyghur Tribunal,” the entity over which he presides, is operating as no more than an insolent improvisation.

But to underestimate the improvisation’s potential for propaganda mischief, would be a serious mistake.

This year’s G7 meeting is scheduled to take place in Cornwall, UK, from 11-13 June. The first hearing of the “Uyghur Tribunal,” as already noted, will take place on 4th – 7th June 2021 at Church House, London. That is neither a chronological nor a geographical coincidence.

There is a record of similar “coincidences” in the annals of Western propaganda machinations. A pertinent example, directly relevant to our topic, can be cited in the form the Report of the Mazowiecki Commission which was submitted to the Security Council of the UN on 3 September 1992 about alleged atrocities in Bosnia and Croatia. The Report, overwhelmingly burdened the Serbian side with charges of grave transgressions and largely absolved other actors. Like the “Uyghur Tribunal” set to open just before G7, it was perfectly timed just before an important Security Council meeting on intensifying sanctions against Yugoslavia and the Republic of Srpska, and as intense lobbying was being conducted behind the scenes to set up an international tribunal, which ultimately turned out to be ICTY, to try war crimes suspects. By generating a human rights violation frenzy at precisely the right moment, the Mazowiecki Commission Report was hugely instrumental in successfully accomplishing both its assigned purposes.

The forthcoming “Uyghur Tribunal” should be viewed in a similar light. By feeding the media and the Western political class selected disinformation about the situation in Xinjiang its mission is to set the stage for whatever restrictive or punitive measures against China are contemplated to follow.

Mainly because of China’s veto power in the Security Council, it is unlikely that the “Tribunal’s” conclusions would lead to the formation of an ad hoc court to try China and its leadership, as occurred with Serbian defendants after the establishment of ICTY. However, the “Uyghur Tribunal” verdict undoubtedly will be useful to increase political pressure on China, as well as to attempt to get Western public opinion on board in favor of exacerbating tensions and approving whatever further hostile measures are in store.

Two recent examples of the use of the Uyghur issue for political profit will suffice. The Coalition for Genocide Response, one of the principal sponsors of the “Uyghur Tribunal,” announced not long ago that “on 22 April 2021, the UK House of Commons will have the opportunity to set the record straight and recognise the China’s atrocities against the Uyghurs and other ethnic and religious minorities as genocide”. In similar vein, in a news report from New Zealand dated 28 April 2021 it is stated: “The Act Party today plans to ask Parliament to debate a motion to declare China’s oppression of the Uighur ethnic minority an act of ‘genocide’. Its motion would ask MPs to vote on whether human rights abuses in the Chinese region of Xinjiang amount to genocide, a move that could compel the Government to take stronger action in condemning the nation”. Significantly, the report goes on that “similar motions have passed in the UK and Canada”.

These are sufficient clues to the overall political strategy behind the “Uyghur Tribunal,” in the near term at least.

One wishes that Chinese representatives would boldly march into Church House (piously located at Westminster Abbey, Dean’s Yard, London) on June 4 to teach Geoffrey Nice, and his fellow panellists who simulate judges, a memorable “rule of law” lesson. Their task, not at all difficult of execution, should be to demonstrate to all present that “Uyghur Tribunal” proceedings are a sham because they do not satisfy even minimal judicial standards, whether in the UK or any other civilized country. They should vigorously challenge any and all evidence admitted by a forum operating without any evidentiary rules whatsoever. They should insist on cross-examining all witnesses and “experts” brought to testify. And they must bring along their own audio and video equipment to record the judicial buffoonery and show to the global audience how in London, United Kingdom, the fount of a once impressive legal tradition, an illegitimate, private, and self-appointed court now sits and hands down its farcical verdict.