Can Guillermo Lasso Ride the Winds of Change in Ecuador?

The toothless, senile old watchdogs of the U.S. Mainstream Media will remain silent and obedient on events in Ecuador. Business as usual will continue.

It is not just in the United States that the results of supposedly democratic, “free and fair” elections should raise eyebrows. On Sunday, conservative businessman Gullermo Lasso swept to an apparently clear 5 percent victory margin in tropical Ecuador winning more than half (52.5 percent) of the popular vote over leftist candidate Andrés Arauz. Now he is looking forward to taking office and power in Quito on May 24. 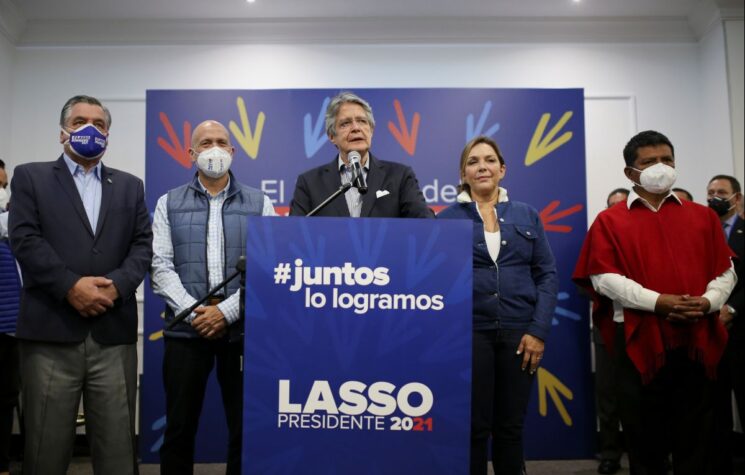 But Lasso must now navigate political clouds and conflicts ahead. The Correismo bloc, named after former popular, reelected former President Rafael Correa who ran the country for a decade from 2007 to 2017, still remains powerful in Congress. And questions linger and are likely to grow over Lasso’s victory, one of the most dramatic ‘come-from-behind’ upsets in the political history of any country.

For in the first round of voting on February 7, Lasso only attracted a derisory 19 percent of the vote: Arauz, the would-be successor and political heir to Correa, had a commanding lead with 32 percent. Even Lasso and third-place candidate Yaku Perez a “Green” environmentalist-focused lawyer who claimed to be a “progressive” but who was suspiciously weak on serious economic issues, together only attracted 38 percent in all.

Lasso therefore leaped from 19 percent to 52 percent in a single bound in the April 11 vote, making him the political Superman of Ecuador politics (and he has never shown any particular charisma or other political superpowers). Or he was the beneficiary of some very determined skullduggery?

For very powerful interests operating in Ecuador were horrified at the thought of Aruaz winning. He had made clear he was determined to renegotiate a crippling $6.5 billion debt repayment agreement with the International Monetary Fund (IMF), which Lasso will now certainly honor. Arauz had also made plain he wanted to challenge previous U.S. untrammeled control of a key strategic air base in the Galapagos Islands thousands of miles out in the Pacific Ocean. U.S. occupation of that base will now continue untroubled.

Most of all, Aruaz offered the real prospect of cracking down at last on the mighty Colombian drug cartels and their associates in Peru: the two countries that produce the largest output of raw material for cocaine in the world. That is not going to happen now either.

And possibly even more alarming for Washington policymakers, Arauz remained determined to hold Washington’s favorite, previous President Lenín Moreno, a hard right reactionary despite his colorful first name, as legally responsible for his handling of the little Ecuador’s disastrous ravaging by the coronavirus pandemic.

This last issue has enormous hemispheric repercussions ranging far beyond Ecuador. For if Arauz had won, he would have launched his investigation into Moreno’s catastrophic coronavirus response record before him. And that would have established a precedent that could have led to Donald Trump’s beloved President Jair Bolsonaro being held equally responsible for the coronavirus response catastrophe in giant Brazil with its population of more than 200 million people.

Pressure is already building on Bolsonaro: On April 8, a Brazilian Supreme Court justice ordered the country’s Senate to investigate the Bolsonaro government’s handling of the coronavirus crisis. The last thing Bolsonaro needed was for a new idealistic social democratic reform president in the same hemisphere to set a precedent for probes into his own incompetent and catastrophic record in failing to deal with the pandemic.

U.S. hostility and paranoia have doomed countless social democratic reformers across the Western Hemisphere over the past 110 years, Arauz has been at pains to reassure IMF officials and bankers alike. While still determined to renegotiate Ecuador’s debt burden, he told Agence France-Presse in an interview the week before the election. We are not going to declare a moratorium against the IMF.”

However, Arauz remained determined to ease the massive burden that the Western financial institutions have imposed upon the long suffering people of his country. His goal for a renegotiated agreement with the IMF was to slow down the slashes in public spending that the body had demanded. He also wants to keep U.S. dollars in Ecuador to enhance economic activities.

In dealing with the drug trade too, Arauz remains determined to protect his overwhelmingly impoverished people sandwiched as they are between the world’s two biggest cocaine producers – Colombia and Peru.

“We cannot forget that the United States is the [main] consumer country of drugs in the region and on the planet,” Arauz told AFP. “Given that, we aim to adjust the cooperation conditions. There must be cooperation with the United States, Mexico, the Central American countries and our neighbors.”

But now that is not going to happen: As Wayne Madsen rightly predicted in these columns, the top officials of the Biden administration will courteously applaud Lasso’s victory. The toothless, senile old watchdogs of the U.S. Mainstream Media will remain silent and obedient on events in Ecuador. Business as usual will continue.

To get full access to the link visit: https://www.strategic-culture.org