As has happened with epochal champions of generational transformation and change in U.S. history before her, Gabbard’s eclipse in Hawaii could lead to her comeback in a far more spectacular form.

In my 2015 book “Cycles of Change” I predicted both the nationalist insurgency of Donald Trump in the Republican Party and the progressive one unexpectedly spearheaded by Senator Bernie Sanders in the Democratic Party that lastingly transformed U.S. politics in the 2016 election cycle.

The Big Lie (of Josef Goebbels) proportions that Russia influenced or decided the shock outcome of the 2016 presidential election in reality was cooked up by defeated Democratic candidate Hillary Clinton – a bungling loser of historic proportions – on the very same night she was still reeling from her rejection at the Javits Center in Brooklyn after the results came out.

Since then, the old Republicans and Democratic Establishments alike have since eagerly clung to the Big Lie because it offers them an excuse to deny and ignore what really happened: The American people for once fitfully rose to express their ringing rejection – on both sides of the political divide – of the ruinous policies of free trade, globalization and ludicrous pretensions to World Empire to which they had been subjected for the previous 70 years.

However, President Donald Trump was ruthlessly opposed, undermined, betrayed, slandered and blocked on his honorable and responsible foreign policy and national security goals to restrain NATO improve relations with Russia and pull U.S. combat forces out of both Iraq and Afghanistan over the following four years and by the time of the next national election in 2024, he will be 78 – as old as Joe Biden is now. Undoubtedly the efforts to destroy and discredit Trump will continue unabated from now until then.

Trump should not yet be ruled out by any means but he has already played the role of being the Prophetic Precursor of the new and coming Political Age, as I pointed, out in “Cycles of Change,” my overview of more than 200 years of U.S. political history, published in 2015.

That “prophetic” pioneering role wa splayed by General John Fremont in 1856 for Abraham Lincoln four years later; by New York Governor Al Smith, the “Happy Warrior” in 1928 for the epochal election victory of Franklin D. Roosevelt four years later; and by Senator Barry Goldwater in 1964 for the eventual presidency and new political era of Ronald Reagan starting in 1980-81.

Who will be the coming leader of the conservative/nationalist Right in 21st century America? The most likely candidate so far by far is Texas Senator Ted Cruz, who ran unsuccessfully against Trump in 2016 before learning for himself the policies and priorities of the coming Political Age.

On April 14, Cruz, renowned for having easily the most brilliant legal mind in the U.S. Congress, eviscerated Kristen Clarke, President Biden’s nominee to head the Civil Rights Division of the Justice Department when she appeared before the Senate Judiciary Committee.

On the Democrats’ side, Independent Senator Bernie Sanders from Vermont is now a twice-busted flush: Both in 2016 and 2020, the Democratic presidential nomination was his for the asking: He in real terms decisively and humiliatingly exposed first Hillary Clinton and then Joe Biden – both heirs of the worthless and despicable Bill Clinton and Barack Obama administrations they served so energetically for so long.

However, on both occasions, Sanders froze up at the crucial moments of decision when the nomination was twice stolen from him by vote manipulation (in 20216) and political chicanery (in 2020) before his eyes. When it comes to the High Noon moment of any political showdown, Sanders will always fold – just as he always has.

On the Democrats’ side, the contest for leadership superficial appears more open, but two dynamic young women in reality easily lead the field.

Right now, New York Congresswoman Alexandria Ocasio-Cortez, ” AOC” , who was supporting herself as a bartender before she won the Democratic nomination for her district and then the congressional election in shock outcomes in 2018, is by far in the lead. This is not even primarily because of AOC’s passionate advocacy of a Green New Deal, which indeed makes absolutely no industrial or economic or financial sense the closer one looks at it: It is because she is genuinely charismatic, genuinely aggressive and fearless in her public appearances.

The more that America’s progressives – admittedly an exceptionally slow-witted lot – wake up to the fact that Bernie Sanders will never lead them to real power or victory in anything, the higher AOC’s star rises.

She is already, at only age 31, the real leader of the Progressive Caucus in the Democratic Party and she is half a century younger than 81-year-old Speaker of the House Nancy Pelosi.

Pelosi only won her precious House majority in November 2018. Yet already, she is watching it vanish before her eyes.

Following the victory of Trump protégé Julia Letlow in a special election in Louisiana in March, the Democratic House majority is only two seats – the narrowest either party has experienced in the lower house of Congress in more than a century. The narrower it gets, the more Pelosi does not dare risk AOC leading “her” progressives against the Speaker herself and against President Joe Biden: And the more AOC’s power grows.

Worse for Pelosi is sure to come: It is perfectly feasible that even before next year’s congressional midterm elections, a handful of congressional special elections could throw control of the House to current Republican Minority Leader Kevin McCarthy, who loathes Pelosi and her ancient creaking clique of cronies with a never-burning passion. Then, Pelosi’s fading clout will be totally gone and AOC with her passion and a new generation of radicals riding the Winds of Change with her will take over Democratic Party in Congress far earlier than any of the Old Fogeys on either side dreams.

AOC must therefore be seen as the frontrunner for the new age: But if she fails to measure up and establish national credibility, the other most likely future presidential hopeful for the Democrats is another forceful, beautiful and exceptionally intelligent young lady hardly older than the New York congresswoman is: That is former Congresswoman Tulsi Gabbard from Hawaii, who was effectively squeezed out from her own congressional seat on the idyllic Pacific island by the machinations of the old Hillary Clinton and Nancy Pelosi gang of rotting old politicos.

However, as has happened with epochal champions of generational transformation and change in U.S. history before her, Gabbard’s eclipse in Hawaii could lead to her comeback in a far more spectacular form.

She may move to California – a vastly superior political base to her home in Hawaii for national U.S. politics. Also, her outstanding military record, highly unusual for a young rising female Democrat of the current generation and her mastery of defense and national security issues potentially gives her a far more potent and impressive credibility across the American continent than AOC.

For Ocasio-Cortez’s appeal is like a laser beam: It is undoubtedly powerful but also quite narrow, centered on the East and West Coasts and to a far lesser degree, the much smaller progressive enclaves in major metropolitan areas across the country.

Gabbard by contrast has the potential to reach deep into the Heartland. She was carefully kept out of most of the nationally televised political debates for the 2020 presidential nomination by her own party’s leaders. They were terrified of her. 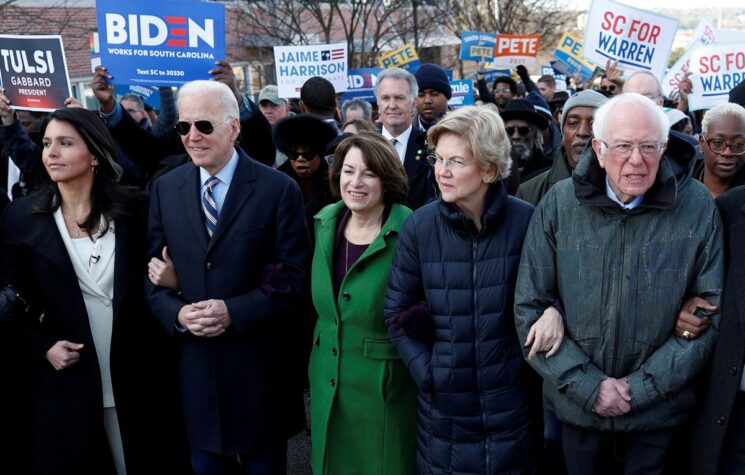 However, Gabbard was an absolute knockout in the debates when she got a word in edgewise. And she proved effortlessly able especially to demolish then-Senator and now-Vice President Kamala Harris. That could prove of priceless importance to the national credibility of the Progressive movement if, as appears likely Harris succeeds Biden into the White House in 2024, or even sooner.

However, Gabbard has also shown the potential to move dramatically from one extreme of the political chessboard to the other, much like a bishop moved a diagonal right across the board:

In January 2021, she launched her own podcast called “This is Tulsi Gabbard” and she has appeared a number of times on the conservative-leaning Fox News Channel since she left Congress, focusing her outspoken attacks on Pelosi and House Judiciary Committee Chair and leading Pelosi crony Congressman Adam Schiff. It is not inconceivable to see her as an eventual running mate for the nationalist right on a Republican ticket led by Senator Ted Cruz in 2024 or 2028. (In 2028, she will still be only 47).

Cruz and AOC are truly powerful potent emerging forces on the Right and Left of U.S. politics. Gabbard has the intriguing potential to completely transform the picture on either side. Between them, they offer hope that the new forces awakened by Trump and Sanders may triumph yet.