Who would be the champion of LaLiga santander in htis season????

Are you a footbal football lover? Are you a big follower of club football? Then LaLiga is a great enjoyment for you. This year LaLiga is the most competitive Leage in the year. There are thirty three round have already passed, but even you can't imagine who would be champion of LaLiga this year. There are  only five round are rest now. Anything can happen in this five rounds. There are four team who are fighting at their best now to be champion. The four teams are Atletico Madrid, Real Madrid, Barcelona and Sevilla. They all have chances to be champion in this LaLiga season. 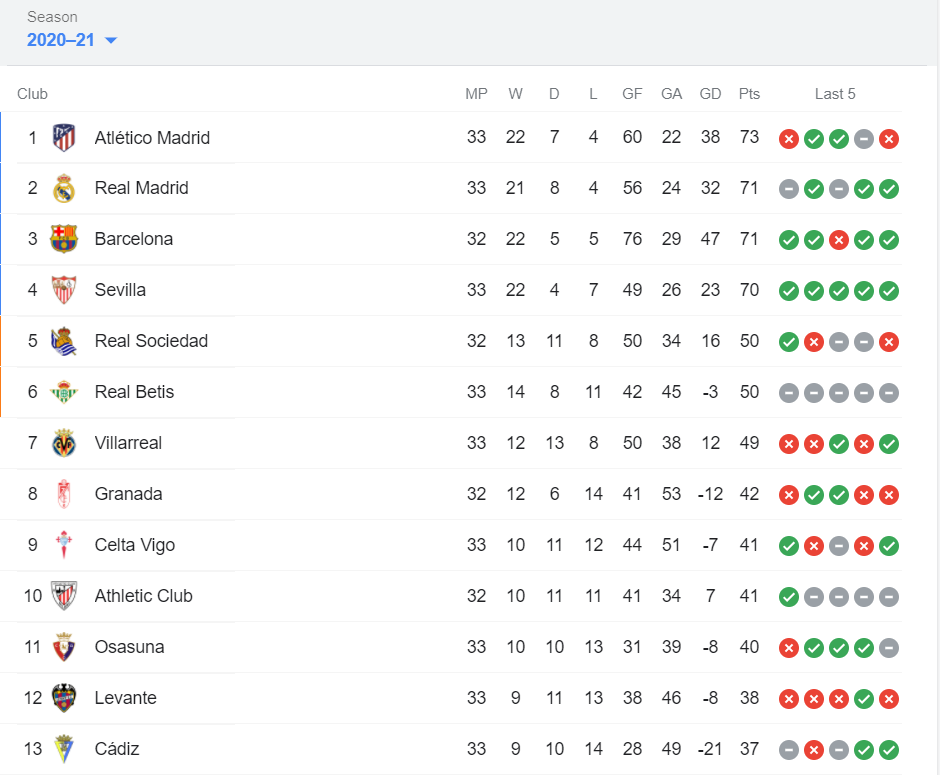 You see that Atletico Madrid are on top of the point table. They played 33 matches in this season and has gained 73 points. Real Madrid and Barcelona both have gained 71 points. Real Madrid have played 33 games equal to Atletico Madrid though Barcelona have played 32 games, one games less than the top two. Sevilla is at 4th position. The have played 33 games and earned 70 points. If Barcelona win their next game, their points will be 74 in equal played game as other top three teams. And they will be topper of point table.

Now the top four team's point is in the range, 73 to 70. It is very hard situation for every team to be champion while you have only five rounds to play more. In the other top three leage of Europe, who will be the champion is almost sure. Manchester City in Premier Leage, Bayern Munich in Bundesliga, Inter Millan in Serie A, They are almost champion in their respective leage except any extraordinary happenings. But LaLiga is the most charming and enjoyable season in this year.

Who will be the champions, may be you have to wait till the last round to know. None can say surely anything. But i think Barcelona has more chances to be champion this year. They have six games in their hand. If they win all the six matches, they will be champion without any doubt. But in this six game they have to play one against Atletico Madrid, the topper of the table. That match can clear who will be the champion. There would be a match between Real Madrid and Sevilla. That match will also affect the title race.

On the other hand Real Madrid and Sevilla have to win all of their games and keep an eye to Atletico Madrid and Barcelona to be champion. It is the most entertaining matter in football i have ever felt. The war are almost end, even then you have no idea who will be crowned. I love football most for this reason...

Who will be champion this year in LaLiga santander? Can you guess anything? Let's have discuss in comment section....

Thanks for visiting my blog.