Shakib Al Hasan is the best in the return series.

These three words have been written many times about Shakib Al Hasan, the best all-rounder of the Bangladesh team in the last one and a half decades. His arrival on the field means the birth of a new fame, his return means something special - he proved it once again in the series against the West Indies.

Shakib has performed better than all the other players of the two teams after returning to the field after 18 months of overcoming the ICC ban. In three matches, he won the Man of the Series recognition with 113 runs with the bat and 6 wickets with the ball and the prize money of 2,000 dollars. This is the sixth Man of the Series award of his career.

Shakib Al Hasan has said several times before the start of the series against the West Indies and after the first match of the series that the performance of domestic cricket does not bother him. Good or bad - whatever it is, he doesn't think much about it. That is why Bangabandhu did not think about the simple performance of the T20 Cup at home. 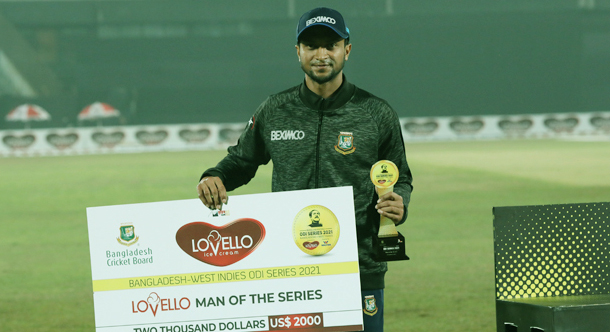 Later in the second match, after taking 2 wickets for 30 runs with the ball, Shakib played an unbeaten innings of 43 runs with the bat and left the field after winning the match. And today (Monday) in the last match he scored 51 runs in the 47th fifty of his career. But he left the field with a groin injury and bowled only 4.5 overs. Where he did not get any wicket by spending 12 runs.

Although he did not take a wicket with the ball in the last match, the award for the best contribution to Bangladesh's victory in the entire series went to Shakib. He has been named Man of the Series for Bangladesh for the sixth time in ODIs. So far, Shakib has been on top of all five Man of the Series awards, jointly with Tamim Iqbal. Which he has now completely taken for himself.