There Is Only One Option on Afghanistan

A recent article in Vox summaries President Biden’s three bad Afghanistan options as reported by the New York Times and the Washington Post:

Option 1. Withdraw all 2,500 US troops by May 1.
Option 2. Negotiate an extension with the Taliban, then leave.
Option 3. Stay in Afghanistan indefinitely.

If the US leaves in the next three months, it’s likely the Taliban will overrun the US-backed Afghan government and once again make life worse for millions of Afghans, especially women and children.

Staying in Afghanistan just a little bit longer would likely delay that takeover, but would also expend any diplomatic capital the US has left with the Taliban and keep US troops in harm’s way.

Finally, violating the terms of the agreement and remaining indefinitely will almost certainly lead the Taliban to restart its campaign, put on hold ahead of the May 1 deadline, to kill American service members in the country.

The senseless, immoral, unjust War in Afghanistan—America’s longest war—has dragged on for almost twenty years. Children—perhaps even grandchildren—of U.S. veterans of this war are now “serving” in Afghanistan. Thousands of U.S. soldiers have died in vain and for a lie, not to mention the tens of thousands of Afghan soldiers and civilians that Americans generally don’t care about since they are “terrorists” and the “enemy,” and the untold number of widows and orphans that U.S. bombs and bullets have made. The Taliban today controls more territory than it did when the United States first invaded “the graveyard of empires.” 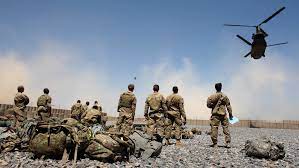 The Washington Post says that Biden “doesn’t have a ‘best’ option — only the one that’s least bad for the United States and its allies.” This “least bad” option is “keeping the troops in place a while longer to avoid a chaotic departure.” Retired Gen. Joseph F. Dunford Jr., former chairman of the Joint Chiefs of Staff, says that “the United States should maintain its 2,500 troops, alongside about 5,000 NATO allies, and hunker down for a long support mission.” But “leaving now would carry a reputational risk for the United States,” embolden “jihadists and perhaps rejuvenate their movement,” shake “allies in the Middle East, Europe and Asia,” and “be an unmeasurable cost to American credibility.” And besides, “If American troops leave and the Taliban regains power, there would be a severe cost in human rights — especially for the women of Afghanistan who have had far greater freedom since the Taliban was toppled in 2001.”

The New York Times points out that “if Mr. Biden decides to withdraw, he will bear some responsibility — and much of the blame — if there is a collapse of the elected Afghan government that American troops and their NATO allies have fought and died for and spent billions of dollars propping up.” A report issued by the Afghan Study Group “argued, in essence, for abandoning the May 1 timetable by saying that the Taliban had not met the conditions for a U.S. withdrawal as set by the Trump-Taliban agreement.” Removing all U.S. troops “would lead to civil war, set back American interests in the region and render pointless the sacrifice of 3,500 coalition troops killed prosecuting the American-led war effort in Afghanistan.”

But there is only one option on Afghanistan that makes any sense: quick, complete, and permanent withdrawal.

It is not just, as the Vox piece concludes, that “after 20 years of war, trillions of dollars spent, and tens of thousands of deaths, the US has only managed to achieve what Army Gen. Mark Milley, chairman of the Joint Chiefs of Staff, humbly described as ‘a modicum of success’ in Afghanistan.”

The war in Afghanistan was a crime from the very beginning. The families of U.S. soldiers who died in vain and for a lie; that is, every U.S. soldier who died there, should be cursing George W. Bush until the day they die.

Will bad things happen if U.S. troops leave Afghanistan? Of course. Will violence increase? Certainly. Will Afghan women and girls have fewer rights? Undeniably. Will LGBTQ Afghans (if there is such a thing) suffer persecution? I suspect that they will. Will live be worse for millions of Afghans? Perhaps. Will human rights take a beating? Undoubtedly. Will America’s reputation be tarnished if U.S. soldiers came home and let all hell break loose? How could America’s reputation get any worse than it is in the eyes of those on the receiving end of U.S. bombs and bullets?

But if U.S. troops do make a quick, complete, and permanent withdrawal, no more U.S. soldiers will die in vain and for a lie. Not one more drop of American blood with be shed for absolutely no reason. Not one more dollar from American taxpayers will be wasted.

And yet, for many years now, I have been called anti-American and anti-military because I have denounced this war as senseless, immoral, and unjust from the very beginning. Go figure.

Biden’s decision to withdraw all U.S. troops from Afghanistan is not quick. Whether it will be complete and permanent remains to be seen.