The Czech Republic Has the Highest COVID Mortality in the World, Despite Strict Lockdowns

The dark and empty streets devoid of commerce have brought back memories of a past that many Czechs would sooner forget.

n March 1, facing the highest COVID-19 infection rate in the world, the Czech Republic’s Prime Minister Andrej Babis introduced what was described as the strictest lockdown in the nation to date.

“People are banned from travelling within the country, between districts, and cannot visit one another,” Al Jazeera reported. “All retailers, except essential shops such as supermarkets, are closed.”

The coronavirus has been hard on everyone, but it has been particularly hard on the Czech Republic. The landlocked Central European nation has the highest COVID mortality rate of any country in the world with more than a million people, with 2,614 deaths per one million people.

The situation is bleak. Dozens of overwhelmed hospitals are on the verge of collapse, reports say, with many gravely ill patients unable to receive care because of a shortage of ICU beds and medical personnel. Hospitals have resorted to employing soldiers, firefighters, and other volunteers to stay operational because so many doctors and nurses have been pushed to the sidelines with illness and fatigue.

“My colleagues at the COVID units are exhausted,” Dr. Kateřina Steinbachová, a physician who works at a hospital in Litoměřice, recently told the Daily Beast. “They have been in it for a year and, in the last few months, have had to endure war-like situations.” 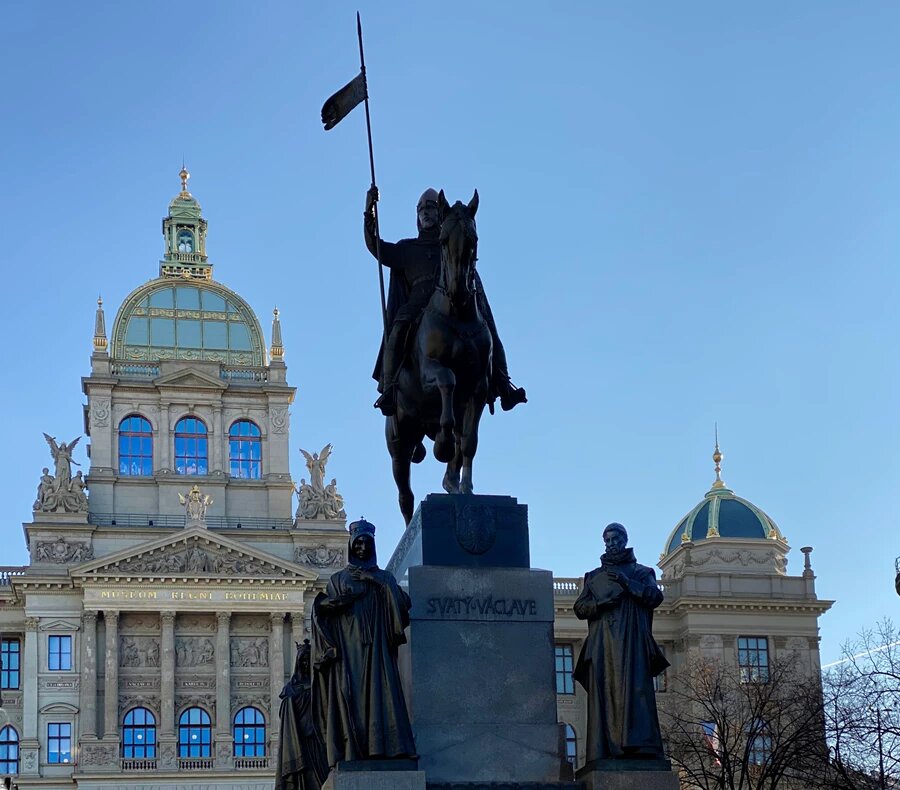 Church bells rang during a minute-long silence at noon last month in Prague’s Old Town Square, where a group had painted 25,000 white crosses. The ceremony was undertaken to commemorate the 25,000 Czechs who had died with the coronavirus over the last year.

Since that time, COVID-related deaths have increased to more than 28,000 deaths in the nation of 10.7 million. Relatively few outside of the Czech Republic have taken notice, however.

On Tuesday The Guardian published a piece not on the Czech Republic, where dozens of people die with COVID each day, but on Sweden, where daily deaths have slowed to a trickle.

“The Scandinavian country, which has opted against strict lockdowns but gradually ratcheted up its still mostly voluntary restrictions, has a seven-day average of 625 new infections per million people, according to ourworldindata.org,” the paper reports.

The Guardian is hardly alone. In contrast to the Czech Republic, Sweden has dominated global news headlines over the last year.

The Czech Republic’s 2,614 deaths per million is nearly double that of Sweden, whose rate is 1,346 per million. As of April 10, Sweden’s 7-day rolling average daily deaths was 5; in the Czech Republic it was 115, more than 20 times higher.

Why Is Sweden Criticized More Than the Czech Republic?

The question is, why has Sweden received so much more criticism than the Czech Republic? After all, like Sweden, critics blame the Czech government for the pandemic results.

“The Czech government has consistently showed incompetent leadership, failing to protect public health, governing through populism rather than taking on expert advice,” Jan Pačes of the Academy of Sciences recently told Al Jazeera.

The difference is the Czech Republic played by the script.

Unlike Sweden, who early in the pandemic announced it would forego a strict lockdown, for most of the last year Czechia operated under severe government restrictions. Currently, the nation has the second strictest lockdown in Europe, second only to Ireland, according to Our World in Data. But the lockdown isn’t new. For the last six months—since late October—the Czech Republic has operated under government restrictions that have grown steadily stricter.

Despite these actions, the virus continued to spread, spiking in December and February and into March.

Sweden was maligned because critics of its laissez-faire policy sought to make the case that Sweden was paying the price for not locking down, even though Sweden actually saw a lower overall mortality rate than most of Europe in 2020.

But the Czech Republic’s experience tells a different story—that lockdowns are ineffective at taming the virus. This is why its tragedy has been overlooked.

Getting Honest about Lockdowns

For months, people have argued we must “follow the science” in designing policies that limit the spread of the coronavirus. Unfortunately, there’s been a widespread and ongoing attempt to overlook scientific data that show there is little correlation between government restrictions and the spread of the virus.

Fortunately, the empirical evidence is becoming increasingly difficult to ignore. In the US, for example, states such as Texas, Mississippi, and Oklahoma have seen their numbers continue to fall weeks after lifting all government restrictions. This was not what lockdown supporters predicted.

Meanwhile, many US states using government restrictions much like the Czech Republic’s have seen their numbers rising in recent weeks.

“Michigan has the highest new cases per capita in the nation, 72% greater than the next highest state,” CBS News reported this week. “Michigan's positivity rate is nearly three times more than the national average.”

This has political leaders perplexed.

"We are seeing a surge in Michigan despite the fact that we have some of the strongest policies in place, mask mandates, capacity limits, working from home," Gov. Gretchen Whitmer said in a TV interview.

Michigan is not alone. Minnesota, Pennsylvania, and Illinois—all states with restrictive government policies—have seen cases rise sharply in recent weeks even as numbers in many open states continue to fall.

Following the science begins with being honest about the efficacy of lockdowns, which evidence shows come with severe unintended consequences. Few understand this better than the Czechs.

The dark and empty streets devoid of commerce have brought back memories from a chapter in recent history that many Czechs believed was over: the communist era.

“Boredom, anxiety and feelings of abandonment suffocated towns back then,” writes Czech reporter Eduard Freisler. “This past year, the string of restrictions, bans, curfews and lockdowns has brought back these unhappy memories for many Czechs.”

Tomáš Rektor, a psychotherapist interviewed by Freisler, said many of his older patients are depressed, noting that the last year has rekindled memories of the “Communist normalization.”

“They feel like they’re being swallowed by grayness,” says Rektor.

Monday brought signs of hope. Children under fifth grade returned to classrooms, travel restrictions were lifted, and a curfew was ended as lawmakers eased restrictions, the Associated Press reported.

Yet there are also ominous signs. Prime Minister Babis, a former officer of the Communist secret service police, remains a believer in lockdowns. In February, he suggested his primary mistake was to briefly open the economy during the Christmas season.

The situation has some Czechs concerned that the people have learned the wrong lessons during the pandemic.

“I am worried that in the post-COVID era, a good enough number of Czechs will want the government to keep helping them,” Pavel Žáček, a former director of the Institute for the Study of Totalitarian Regimes, told Freisler, “and the country will shift towards socialism again.”