The latest research dovetails with previous studies that found gun buyback programs were ineffective but popular with the public. 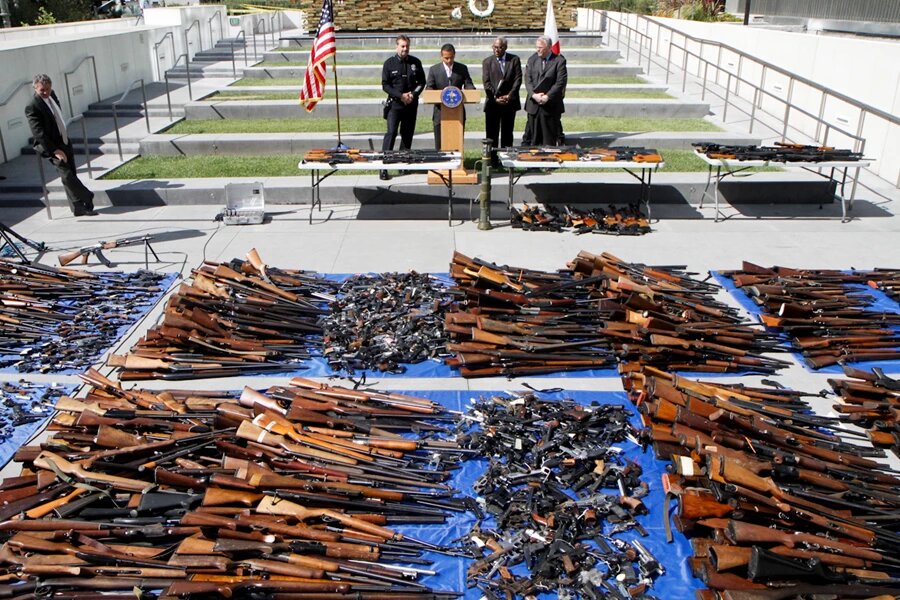 Shortly before Christmas in 2018, a woman named Darlene voluntarily turned in a 9mm pistol to the Baltimore Police Department. It was just one of about 500 firearms the department collected that day as part of the city’s gun buyback program, which paid citizens somewhere between $25 and $500 in exchange for their firearms and high-capacity magazines.

Darlene, however, had a confession. She was turning in her 9mm, she told a local news reporter, so she could “upgrade to a better weapon.”

Supporters of gun buybacks, such as Baltimore’s mayor and police chief, say the program is an effective way to reduce violent crime.

"Our point here is, there are guns on the streets of our city,” said then Baltimore Mayor Catherine Pugh. “We are signaling folks out there, we don’t care if it’s grandpa's gun or your gun, we want it."

Darlene’s story, however, was used as ammunition by skeptics of gun buybacks to show the programs are ineffective and a waste of taxpayer resources. Skeptics of gun buybacks have long argued that stacks of rifles, pistols, and gun magazines “look impressive when they're displayed at news conferences,” but argue they do little to reduce gun violence.

“Researchers who have evaluated gun control strategies say buybacks—despite their popularity—are among the least effective ways to reduce gun violence,” USA Today reported back in 2013.

The paper, which was authored by economists at the University of California, Santa Barbara, San Diego State University, and Montana State University, differed from previous studies in that it didn’t study a single city’s Gun Buyback Program (GBP), but an array of them.

Researchers said they identified 339 GBPs across 277 cities, examining public records to determine the number of firearms sold in each. They concluded the data is clear: gun buybacks do not reduce gun crime.

The NBER paper dovetails with other studies that focused specifically on Seattle, Buffalo, and Milwaukee, which found buyback programs were ineffective but popular with the public.

"I think the evidence still suggests that if the goal is to prevent intentional homicide, the gun buybacks are not likely to achieve that objective," Michael S. Scott, director of the Center for Problem-Oriented Policing and a clinical professor at Arizona State University, told The Democrat and Chronicle in 2016.

The Cost of Gun Buybacks

Some may argue that there is little harm in gun buybacks even if they don’t work, since they are voluntary. Yet this ignores the fact that gun buybacks are quite costly.

This is just one city. Costs are substantially larger at the national level. Australia’s massive 1996 gun buyback program, for example, collected 640,000 firearms, costing taxpayers some $230 million. A buyback on that scale in the US would involve the collection of about 78.6 million firearms, researchers said. The cost would likely be tens of billions of dollars.

In the US, however, gun buybacks tend to occur at the local level. Nevertheless, costs can run surprisingly high, since there is little incentive to control spending. The lack of spending oversight has at times manifested itself in comical ways.

In 2019, for example, YouTuber Royal Nonesuch was able to make $300 by selling several “pipe guns” he made out of scrap—he described them as “the crappiest guns” he ever made— to the state of Missouri. Officials at the event didn’t seem to care or even notice, evidenced by the fact that the individual who paid Nonesuch never bothered to inspect the firearms.

Economist Daniel Mitchell offered an anecdote that is perhaps even more amusing. During Baltimore’s 2018 gun buyback, Mitchell noticed the city was offering people $25 for every “high-capacity” magazine they turned in.

A quick online search revealed that some magazines could be purchased for between $11-$13. This meant a clever entrepreneur could have purchased a car full of magazines and turned them into the city to make a quick, hefty profit at the expense of taxpayers (and to the benefit of gun manufacturers).

If a preponderance of evidence shows gun buybacks are ineffective and costly, it invites an important question: why are they so popular with local governments?

The answer can be found in public choice theory, an economic concept pioneered by Nobel Prize-winning economist James Buchanan that essentially says government officials make decisions based on self-interest just like everyone else.

Gun buybacks may not be good policy, but it turns out they are great politics—especially in cities plagued by gun violence.

For starters, an abundance of research tends to agree that buybacks are relatively popular with the public. The policies have the appearance of being “voluntary” (except, of course, for the wealth that was taxed to make the purchase), and are easier to pass and less controversial than gun control laws. This allows politicians and bureaucrats to show they are “doing something” to reduce gun violence in cities. Meanwhile, the only real costs of gun buybacks—tax revenues essentially wasted—are widely dispersed, which, as F.A. Hayek once pointed out, makes them “difficult to see.”

The popularity of gun buybacks is yet another instance in the government arena of good intentions overshadowing dismal results.