After months of scathing criticism, US media and politicians are reconsidering Florida’s response to the pandemic.

In July, Adam Weinstein of The New Republic wrote that Florida Gov. Ron DeSantis was leading Americans “on a Death March” by not embracing the same COVID-19 restrictions as many other US states.

“Keeping churches open—as well as beaches, restaurants, and dividend-yielding commerce—has been a big priority for Ron DeSantis,” wrote Weinstein. “DeSantis has resisted calls from medical experts and Florida residents to return to quarantine measures or shutdowns of nonessential businesses.” 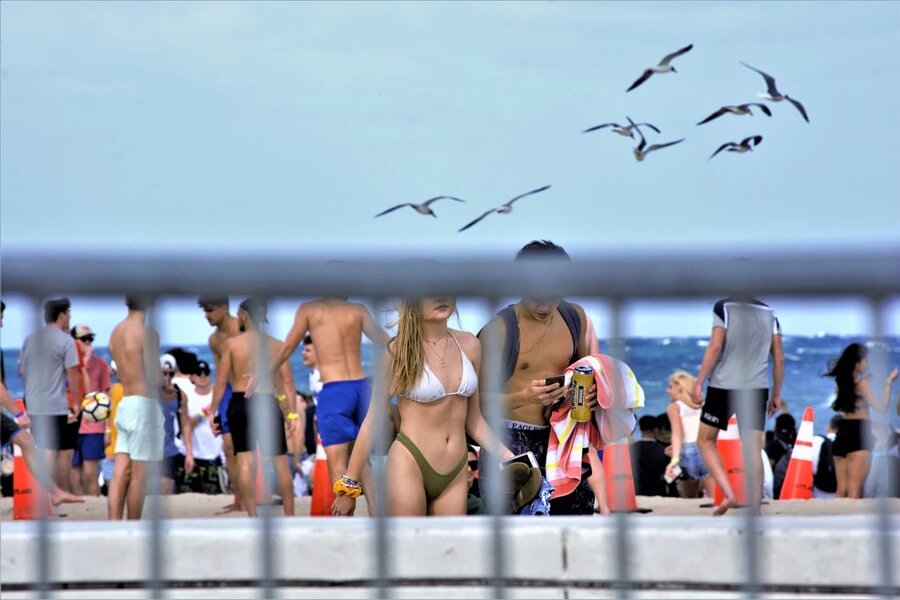 Weinstein wrote that DeSantis, instead of listening to the experts, was simply encouraging residents to behave responsibly, which Weinstein called a “libertarian-dreamer gambit.” Such an approach, he wrote, made DeSantis an accomplice to murder and perhaps even genocide.

“As I write this, the virus has killed 44 times more Americans than died on 9/11,” Weinstein wrote. “Eventually, many of our political leaders will be seen for what they are in this: witting accomplices to homicide on a scale that Republicans might call genocide, if they watched it unfold in another country.”

A Tale of Two States

Weinstein’s comments seem hyperbolic today (to put it mildly), but he was hardly the only member of the media and the political class making such claims, even though Florida’s COVID-19 mortality rate was far lower than many other US states (and remains so today).

More than six months later, US media and politicians are reconsidering Florida’s response to the pandemic, Axios reports: "After a solid year of living with a pandemic, the national press is beginning to ask the question that even Democrats have been quietly pondering in the Sunshine State: Was Gov. Ron DeSantis' pandemic response right for Florida?”

The article highlights a pair of recent articles—one in The New York Times and one in The Los Angeles Times—that compared Florida’s pandemic response and outcome to that of California, a state where the virus exploded over the winter despite the fact that the Golden State had the harshest lockdown in the US.

The LA Times and the NYT are not the only media taking a closer look, either. The Associated Press published its own analysis over the weekend—“Virus tolls similar despite governors’ contrasting actions”—and Newsweek published a piece under a similar headline Monday: “Florida Sees Same COVID Case Rate as California, Despite No Statewide Restrictions.”

Here is the lead to the AP’s story:

Nearly a year after California Gov. Gavin Newsom ordered the nation’s first statewide shutdown because of the coronavirus, masks remain mandated, indoor dining and other activities are significantly limited, and Disneyland remains closed.

By contrast, Florida has no statewide restrictions. Republican Gov. Ron DeSantis has prohibited municipalities from fining people who refuse to wear masks. And Disney World has been open since July.

Despite their differing approaches, California and Florida have experienced almost identical outcomes in COVID-19 case rates.

How have two states that took such divergent tacks arrived at similar points?

All four articles try to puzzle out the answer to this riddle, and many answers are offered. Several people interviewed said the comparison between California and Florida shouldn’t be made.

“In many places we have much greater vulnerability than Florida, so it’s comparing apples and oranges,” L.A. Mayor Eric Garcetti told the LA Times.

“The comparison of California and Florida is not fair,” Ali Mokdad, an epidemiologist at the Institute for Health Metrics and Evaluation at the University of Washington, told the paper. “California is a much harder situation than what Florida has to deal with.”

How these claims fit with the reality that Florida’s percentage of population over 60 is about 50 percent higher than California’s is not explained.

A Shift in Thinking?

While none of the articles come out and call lockdowns an outright failure, overall it’s clear something has changed since July. For starters, The New York Times points out that fear played a role in shaping at least some COVID policies (and many responses to those policies), which today look ridiculous in hindsight.

“When [Florida] did not close beaches, there was national outrage, though the decision seems obvious in retrospect, given how much safer people are outside,” the Times notes.

The Grey Lady also alludes to the tradeoffs involved in strict lockdowns. Patricia García, a 34-year-old Democrat and writer who moved to Florida from New York in 2017, told the paper she unexpectedly found herself defending DeSantis’s policies to friends back home, because she enjoyed having a life.

“People here, they’ve been able to work. The kids have been able to go to school,” García said. “We have this reputation in Florida of being all Florida Man and crazyland. But I’d much rather be in Florida than California, New York or Chicago.”

Overall, the articles exploring the Florida-California responses and results represent a remarkable shift from last summer, when Weinstein and others were using fevered language comparing DeSantis’s laissez-faire approach to a “death march.”

Such rhetoric was unconscionable for many reasons, not the least of which was the fact that we already knew that COVID-19 wasn’t as deadly as previously believed, modelers had been proven astronomically wrong in their predictions, and there was reason to doubt the efficacy of lockdowns.

It’s clear that the presumption that lockdowns and other government restrictions are effective is gone. This is not to say the debate over the (in)efficacy of lockdowns is over (as Mayor Eric Garcetti’s claim that the California-Florida comparison is not “fair” makes clear). But it does show we’ve entered a new phase in the debate.

For months on end, as fear of the virus took hold, Americans were bombarded with phrases like “stay home, stay safe” and “if it saves just one life” that were designed to make them bow to whatever restrictions bureaucrats and political leaders said were necessary.

Implicit in the fear and slogans was the idea that government action would protect others and save lives, thus orders were not to be questioned. To challenge this premise or the wisdom of a particular policy invited accusations of selfishness and callousness toward human life. (As did mere inaction.)

Amesh Adalja, a senior scholar at the Johns Hopkins Center for Health Security, today makes it clear such thinking is far from helpful.

“This is going to be an important question that we have to ask ourselves: What public health measures actually were the most impactful, and which ones had negligible effect or backfired by driving behavior underground?” Adalja told the Associated Press.

What Was Not Discussed

This shift in thinking is important because it’s related to something overlooked (or mostly overlooked) in the articles.

One might ask, Why must we analyze which public health measures worked? Why not simply take extreme precautions? What’s the harm in that?

The harms, it turns out, are severe.

COVID cases and mortality throughout California and Florida are compared at length in the news articles, as are some economic data (like the fact that California’s unemployment rate is nearly double Florida’s). But there is very little discussion about the unintended consequences of lockdowns, which are legion.

Indeed, the Associated Press recently reported that doctors are witnessing an “international epidemic” of child suicide.

These are the unseen costs of the lockdowns that will linger for decades. But Dr. Anthony Fauci remains unmoved. The nation’s top infectious-diseases expert continues to warn against easing virtually any restrictions.

"We want the levels of virus very, very low, and then we will have much, much easier time to safely pull back and get the economy and all the other things that we want to be normal," Fauci told "Face the Nation" over the weekend.

Fortunately, states across the US have seen enough. They are reopening in droves, despite Fauci’s warnings. Last week, Maryland became the latest state to reopen its economy when Gov. Larry Hogan announced that retailers, eateries, and other businesses will be permitted to reopen without capacity restrictions. Governors in Texas, Mississippi, Arizona, Connecticut, Arizona, West Virginia and beyond have announced similar plans.

This is the beauty of federalism. America’s founders understood the best way to form an enduring Union and protect liberty was to disperse power for self-governance and among the states, which serve (in the immortal words of Justice Louis Brandeis) as “laboratories of democracy.” This allows Americans the freedom to vote with their feet.

“I’d much rather be in Florida,” Patricia García told the New York Times.

Thankfully, because of federalism, Americans have that option.