For the super rich, inflation is like Kryptonite. It's the one thing that can destroy you.

Millions of hearts broke Thursday when people woke to find out somebody else won the $731.1 million Powerball drawing. (Including mine.)

We may never know the identity of the lucky winner, who purchased the ticket at a small store in Maryland, since the Old Line State is one of only a handful that allows winners to remain anonymous. 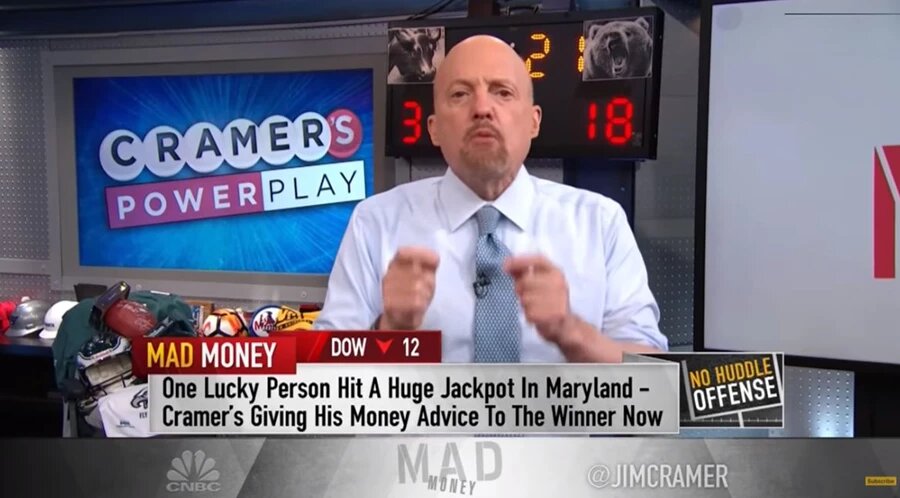 “You know what, if you won the lottery – Yes, I’m gonna say it: 5% in bitcoin,” Cramer said Thursday.

“Don’t buy it all at once,” Cramer added, noting the cryptocurrency has a history of high volatility. “But it’s an important new store of value.”

A Brief History of Inflation

Cramer himself is an owner of bitcoin, a type of digital currency created in 2009 that uses peer-to-peer tech and operates independently from central banks. The “Mad Money” host announced in December he had purchased some of the famous cryptocurrency when prices fell to $17,000 a coin, explaining he saw it as a way to diversify his portfolio.

“I have gold,” Cramer explained. “I want to diversify into some bitcoin, not a big position for me but it’s certainly important to be diversified and bitcoin is an asset and I want to have a balance of assets.”

The hedge paid off for Cramer. By January bitcoin prices had surged to north of $40,000. But Cramer isn’t suggesting the Powerball winner should purchase bitcoin as an investment to make money (though that would certainly be nice, of course). Instead, he says bitcoin offers vital protection against perhaps the biggest threat to a winner of a $731 million ticket: inflation.

“If you’re already rich, you have to worry about inflation the same way Superman worries about Kryptonite. Because it’s the only thing that can really wipe you out,” said Cramer. “Given the way we’re spending like drunken sailors in this country, [inflation] may be an issue.” (Cramer is less concerned about inflation for regular portfolio managers, saying he doesn't see it as a serious concern.)

Now, it would take an awful lot of inflation to wipe out a fortune north of a quarter of a billion dollars (the total winnings after taxes and other penalties are deducted), one might argue.

This is true, of course. But history is replete with examples of hyperinflation—inflation occurring at very high rates—that did precisely this.

The worst case of hyperinflation occurred in Hungary during the first half of 1946. During its height, research shows daily inflation reached nearly 200 percent, with prices doubling roughly every 16 hours, resulting in a monthly inflation rate of 14 quadrillion percent.

Other famous examples include Weimar Germany—which saw the price of a single loaf of bread rise from 250 marks in January 1923 to 200,000 million marks by November of that year—and more recently Venezuela, which in 2019 saw inflation hit 10 million percent. (These are the Ludicrous Speed versions of inflation.)

In any of these cases, the Powerball winner would have found her fortune reduced to almost nothing if the winner had not hedged by buying other assets—land, gold, or other hard commodities—to mitigate the risk of inflation.

Like the price of any good or service, the purchasing power of money is determined by supply and demand.

One of the risks of “fiat money”—government-issued currency not backed by any commodity (such as gold)—is that it has no intrinsic value in itself and the supply is controlled by the government that issues it. This has resulted in, at times, great instability in the supply of money.

The United States experienced its share of inflation in the 20th century, but has avoided hyperinflation. But the country is also entering uncharted waters.

Over the last decade and half, the Federal Reserve—the central banking system of the United States of America—has seen its balance sheet increase from $870 billion to $7.4 trillion. Nearly half of that increase occurred in the last 9 months, including $2.3 trillion in pumping over a period of six weeks following the arrival of the coronavirus.

The cash injection, which came from purchasing US Treasury debt and mortgage-backed securities, resulted in a stock market rally. But it also put the Fed in a precarious position.

“[The] Fed is about to embark on something it has never done before,” the Washington Post reported in April. “Directly buying corporate bonds, directly buying debt from cities and states, and making ‘Main Street’ loans to midsize firms.”

There is no question that when this money begins to trickle down in earnest it will reduce the purchasing power of the US dollar. The only question is how much. And this is where bitcoin comes in.

Bitcoin has many of the same attributes as fiat money. It is easily transferable. It’s divisible and fungible. And its ownership can be clearly established.

Unlike fiat money, however, the supply of bitcoin is predictable and strictly limited.

We know for a certainty that only 21 million bitcoins will be produced. Ever. About 18.5 million of those bitcoins already exist. This makes bitcoin a far more durable form of currency than fiat money. The value of bitcoin can’t be eroded by a central bank simply creating more of it, which is precisely the history of fiat money.

“I do not think it is an exaggeration to say that history is largely a history of inflation, usually inflations engineered by governments for the gain of governments,” the Nobel Laureate economist F.A. Hayek once observed.

Bitcoin, on the other hand, is designed to be scarce.

This makes bitcoin a uniquely durable and convenient currency, one capable of storing vast fortunes on nothing more than a USB drive. (For people still trying to understand the value proposition of bitcoin, stop and think about that.)

That’s why for lottery winners or anyone with capital looking to hedge against the frightening specter of inflation, bitcoin is worth a hard look.