Despite having the strictest lockdown in the US, California accounts for 17 percent of all active COVID-19 cases in the US.

ACOVID-19 vaccine may have arrived, but government lockdowns are far from over. 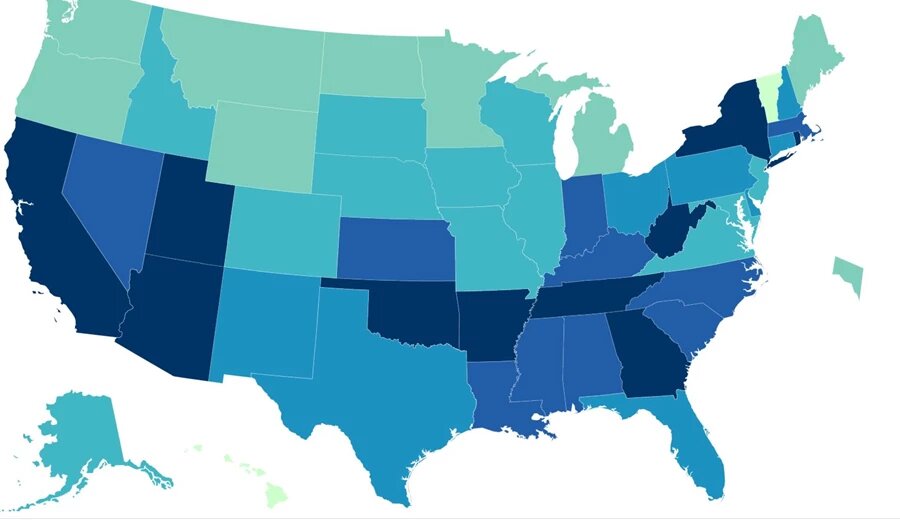 On Monday, Prime Minister Boris Johnson reinstated a strict lockdown in the United Kingdom, citing a surge in infections and hospitalizations fueled by what officials say is a more transmissible variant of the coronavirus.

"It is clear that we need to do more to bring this new variant under control," Johnson said. "That means the government is once again instructing you to stay at home."

Lockdowns remain a reality in many parts of the US as well, although many states—Alaska, Florida, Missouri, South Dakota, and Alabama, among them—have abandoned nearly all restrictions.

MultiState, a state and local government relations company, has a tool that allows readers to track lockdown stringency in US states. The company’s methodology relies on reporting on nearly a dozen factors—Are residents under stay-at-home orders? Are bars and restaurants allowed to operate beyond delivery? What constitutes an “essential” business?—to determine each state’s ranking.

Many believed lockdowns might be nearing an end with the announcement of effective vaccines. Unfortunately, that seems far from certain.

Lawmakers continue to rely on lockdowns and various other restrictions in an effort to tame the spread of the virus, but these restrictions come at heavy costs to individuals and economies: job losses, business closures, depression, drug overdoses, and a massive surge in poverty, among them.

This evidence in itself would bring into serious question the ethics of infringing on basic freedoms and fundamental human rights in an effort to slow transmission of a virus. However, lockdowns become even more questionable when one considers evidence that suggests these draconian restrictions seem to have little impact in slowing the spread of the virus.

The aforementioned United Kingdom, for example, is “reimposing” a lockdown, we’re told. But data show the UK’s lockdown stringency has remained remarkably consistent. The toll of the virus, however, has not.

Data in the US tell a similar story.

Similar patterns can be found in other strict lockdown states such as New Mexico, Washington, and Illinois—all of which are witnessing sharp upticks in cases and deaths despite having some of the strictest lockdown policies in the US.

Counterexamples, however, can also be found. Oregon, Vermont, Delaware, and others have seen more modest case increases and deaths with the arrival of winter.

The Takeaway: The Fatal Conceit

The takeaway here isn’t that the politicians in Delaware and Vermont had better pandemic plans than lawmakers in California and New Mexico or are achieving better compliance. Indeed, Los Angeles Mayor Eric Garcetti recently pointed out the virus is surging in LA County despite “great compliance” with public health recommendations.

The takeaway is that central planners can’t manage the coronavirus. Not effectively anyway. They lack the knowledge and the mechanisms of control necessary to control something as complex as a virus. And to be fair, managing a submicroscopic infectious agent that replicates by transmitting itself through living cells is a rather tall task. (Much more complicated than, say, delivering the mail.)

The inability of central planners to effectively manage the virus needs to be acknowledged. One of the duties of the economist is to offer a dose of reality to those who dream they can create anything if they only have enough power.

“The curious task of economics is to demonstrate to men how little they really know about what they imagine they can design,” Nobel Prize-winning economist F.A. Hayek famously explained in The Fatal Conceit.

Lockdowns may not be effective, but that doesn’t mean they are going away. Politicians are incentivized to embrace them, even if they don’t work.

Perhaps the best way to end the lockdowns is for Americans to remember that all people are born with “certain unalienable Rights,” and that government exists only to secure these rights.

Once people remember this basic truth, they can find the courage and fortitude to peacefully resist this historic government overreach that has proven so harmful to so many.

Fortunately, many are already actively doing so. From Beverly Hills to Louisville to New York City and beyond, Americans are rediscovering the great tradition of civil disobedience.

“I was not born to be forced,” the great American poet Henry David Thoreau, author of Civil Disobedience, once asserted. “I will breathe after my own fashion."

It's a principle we never should have forgotten.