Last summer, when cinemas were open in France, I saw the film Mr; Jones and wrote about it for LRC. As I wrote then, the film dramatizes “the voyage of Welsh journalist Gareth Jones (played by the English actor James Norton) to the Soviet Union in 1933 where he became an eye witness of the forced famine in Ukraine now called the Holodomor, (the word is from the Ukranian meaning murder by hunger). The Holodomor, which consisted of the slow tourtured murder of millions of Ukranian peasants by Stalin’s Communist Party, is barely known by the general public, especially compared to the Holocaust perpertrated by Hitler’s Nazis.”

Also in that article I wrote about Walter Duranty, the New York Times reporter in Moscow at the time. “The response from that era’s mainstream media, the foreign correspondents stationed in Russia, was akin to the cancel culture of today. Taking the lead was the Pulitzer Prize winning correspondent for the New York Times (isn’t it always the Old Gray Lady?) Walter Duranty, known as Stalin’s apologist. From the book on Duranty by S.J. Taylor the events are known. A Soviet press officer told the correspondents that their credentials would be denied unless they repudiated Jones. They even made a party out of the meeting to come up with the phrases to call Jones a liar in all but name. Duranty’s response to Jones included perhaps the most cynical excuse for power ever uttered. “But–to put it brutally–you can’t make an omelette without breaking eggs, and the Bolshevik leaders are just as indifferent to the casualties that may be involved in their drive toward socialism an any General during the World War who ordered a costly attack in order to show his superiors that he and his division possessed the proper soldierly spirit.” While admitting that there had been “food shortages” there was no “death from starvation” but only “widespread mortality from diseases due to malnutrition.” Jones responded in the Times (printed about a month later after the furor had died down, but much more from that newspaper than we could expect today) that he would stick to the facts that he had found on the ground, interviewing peasants themselves, not learned second hand through government sources. Jones even felt pity for these compromised journalists who had to be “masters of euphemism and understatement.”” 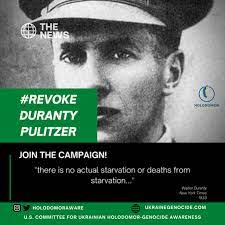 I was recently contacted by the Duranty Revocation Subcommittee of the U.S. Committee for Holodomor-Genocide Awareness to alert me of their new national campaign to demand the revocation of the 1932 Pulitzer Prize awarded to Walter Duranty.

The Ukranian Weekly explains that the Duranty revocation campaign has the following goals: First, to build a network of journalists and educators, empowering them to continue writing articles, editorials, and promoting the great travesty of mistruths and lies perpetrated by Walter Duranty. Second, to request that the Ukrainian American community, especially students, use social media to promote an awareness campaign to help with media pitching, design work and writing. Third, announce a social media contest to develop and post Duranty memes with the hashtag #RevokeDurantyPulitzer. Fourth, spur a worldwide petition on change.org for the revocation of Duranty’s Pulitzer Prize.

The Committee maintains an information packed website to learn more about the Holodomor.  One historical item posted is a State Department memo from 1931 filed from Berlin, where Duranty had stopped in during his vacation. It is the smoking gun for his complicity, but also critically important to note is the complicity of the New York Times itself. The memo states, “In conclusion, Duranty pointed out that, ‘in agreement with the NEW YORK TIMES and the Soviet authorities,’ his official dispatches always reflect the official opinion of the Soviet régime and not his own.”

I support the efforts of the Committee to expose the pedalling of false news 80-90 years ago.  It is sweet irony to see cancel culture applied to the New York Times where more than ever they are still a key propagator of various flavors of propaganda.