These pictures prompted a small avalanche of msgs all asking the same question: “Who’s the blond!” Rather than provide her name, address, measurements, and phone number (now 42 years later), here’s the bigger story of who she was, how she got there, what was going on, and what was Dudley Moore like anyway?

A week before, we were booked at a popular watering hole to host what was originally dubbed as Atlanta’s Best Ass contest, sponsored by a certain blue jean maker and its Atlanta outlet. For obvious publicity purposes, the name was changed to Atlanta’s Best Jeans. Of course, no one caught on!

The evening of the contest had my partner and me on a flatbed trailer in the parking lot of the mall where the sponsoring bar was housed. Contestants came up wearing the sponsor’s jeans and the audience selected the winning… jeans... based on how well each contestant took the shape out of the sponsor's product. 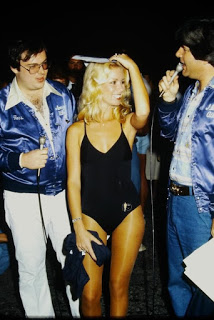 When it was over, we and all the lascivious attendees retired to the sponsoring bar for Happy Hour and some additional ‘post-jeaning’ fun ‘n frolic. From the stage, I saw one of the Atlanta Journal-Constitution’s reporters come in with one of the most Drop Dead Gorgeous women I’d ever seen! And in the ’70s, the Big Peach was filling up with DDG women, moving in to grab one of the great jobs the booming economy was producing. My first reaction: What the hell is SHE doing with HIM? In broadcasting, they say “He’s got a great face for radio”. Well, this AJC scribbler had a great face for newspaper.

Being the shy, reclusive type, I told my partner, “Hold my mic!”, lept off the stage, and bounded over to where they were hangin’ out.

Walking quickly right up to the unsuspecting pair, I nodded to him, put out my hand to her – which she took – and said, “Hi, I’m Brian Wilson of the Nearly-Famous Ross & Wilson Show. Thanks for coming out this evening. Listen, we’re hosting the premiere of the movie 10 with Dudley Moore next Friday at the Perimeter Mall. Dudley himself is gonna be there…we’re going to host a beauty contest, watch the movie and have dinner at Brennan’s with Moore and some of the cast. Would you like to come along? Great!” Without waiting for her answer, I grabbed a cocktail napkin off the bar, and said, “Look, I gotta get back up there…just put your name and phone number on this and give it to a waitress. I’ll call you tomorrow. OK? Excellent!” Turned, gave the speechless scribbler look, and hustled back to the stage.

The whole encounter lasted 20 seconds. Tops. From the stage, I saw was getting an ugly look from the AJC dude while his DDG date, still smiling, was writing something on a napkin.

Ross asked, “What was that all about?”

“Getting a date for the 10 thing next week. I think. Maybe.”

Minutes later, just before we started our stand-up routine, a waitress came to the stage and handed me the napkin with her name, address,  phone number, and ‘Call me tomorrow after work. Don’t forget! Abby.” Like that was gonna happen! I looked up just in time to see her walking out with Mr. Not-So-Wonderful trailing a few steps behind.

So I called; we chatted a bit. Her name was Abby Thibodaux,  a rep for what we know today as Big Pharma; originally from Oxford, Mississippi so, of course, the LSU-Ole Miss sniping started immediately. She asked about the Friday festivities, the movie, beauty contest, dinner. I explained the movie title was taken from an (alleged) grading scale that rated women 1-10, with 10 the epitome of beauty, perfection of sexiness – all the things you’d get ostracized, rejected, repudiated, banished, deported, exiled, expatriated, clobbered, canned or shot for today – and Bo Derrick was the 10. That’s all I knew. The beauty contest for Atlanta’s 10 was open to the first 10 to qualify –whatever that meant; we were the “Celebrity MC’s”, lending our radio star power to draw in massive crowds. Compared to the Bo Derrick posters, even Stevie Wonder could have guessed just how stupendously underwhelming our magnetism was for this event. And his poster would have been in Braille!

Her apartment complex was near Cumberland Mall, not far from Perimeter Mall. (Lotta Malls around Atlanta in the 70s.) We went on at 7; I picked her up at 6. She was even more ravishing, dazzling, sexy as I recalled from a week earlier: wearing the proverbial simple black dress, what I assumed were “comfortable shoes”, carrying what looked like a black miniature duffle bag. (Not being an authority on Women’s Handbags, Purses and Accessories, that description might be more insulting than descriptive but stick with me…) I gallantly opened the passenger door (men used to do mannerly things like that 40 some years ago), she demurely got in (women used to do modest things like that before skirts got as short as belts) and off we went, challenging Atlanta’s lingering after-work traffic on the Perimeter, following the several spotlights waving their Come Hither rays across the sky, totally appropriate for a World Premiere, guiding one and all to the evening’s excitement.

There’s a bittersweet downside to being The Date on occasions like this. While you are with the MC, we’re working; so as The Date, you’re one of the crowd, except you’ve got the coveted VIP tag: Ticket to Everywhere. Still, much of the time, you’re on your own. No problem for Abby; she took it all in, actually ran into a couple friends while R&W got the schedule and directions. For most of the next hour, Abby was one of the crowd.

We were announced promptly at 7, welcomed the crowd with a few of our customary intemperate remarks, explained the Atlanta’s 10 contest that was about to begin, but first…had the extinct pleasure of introducing the star of 10, Dudley Moore. (He was the Star assuming you were immune to the Bo Derrick posters.)

Not knowing much about him, I managed 5-10 minutes with Dudley off the set, remarkably discovering in those few minutes we not only appreciated each other's sense of humor but discovered a couple of personal matters in our lives that were remarkably similar with equal consequences. But that’s another story…

Dudley appeared, made a few comments, got some serious laughs, and took his seat with a few “local dignitaries” as Honorary Judge of the Atlanta’s 10 contest about to begin.

As beauty contests go, this one was maybe a tad more benign than most; specifically: no Talent competition! This was all about Personality, Composure in the face of Ross & Wilson impertinent and lascivious Q&A, and, of course, how well the Contestant took the shape out of her bathing suit.

We had bio sheets on each lady so things progressed smoothly and quickly with the sounds of partisan appreciation filling the air for each Vision of Beauty who appeared.

Until we got to number 10 and one of the Organizers handed me a note: “Miss (name forgotten) had dropped out due to an emergency but a last-minute replacement had been found…please welcome Miss Abby Thibo…ABBY THIBADAUX!?” And out pranced my date, Abby, the blond in the picture at the top of this story. Black swimsuit. Blond hair. Big smile bordering on a giggle…wait! Where did that black swimsuit come from?

Amid the cheers, whistles, hooting, and hollering from the Testosterone Section, I said….

“Didn’t I see you earlier this evening… somewhere else nearby?”

“But I think you were wearing something… more than that.”

“This old thing…?” holding out the Simple Black Dress she was clutching in one hand.

“Aren’t you missing something?”

“Oh…this?” Her VIP Pass. She deftly raised it over her head (explaining the pose in the picture).

Small talk aside, we went thru the same Q&A 1-9 did; she did great, of course. When done, we tossed it to Dudley Moore and the judges for the decision. They quickly picked Abby and the crowd went wild. All the girls were very attractive – of course – but Abby was stunning, with a personality to match. Dudley presented her with the trophy, a few last words and it was into the theater to see Bo!

Abby dashed off to the Ladies Room, returning in the Simple Black Dress and miniature duffle bag.

“So…do you always bring your swimsuit with you on dates?”

She laughed. “That wasn’t mine. When the other girls didn’t show, my friend got a friend who works at Rich’s to just grab one I could wear. I guess it was OK for the contest but too boring for me; I prefer a 2-piece.”

Of course, the movie was great, one of the top movies of 1979; Dudley Moore received a Best Actor Oscar nomination. Dinner was catered by Brennan’s -- also great. Abby and I sat with Dudley Moore, talking and laughing until Dudley had to do his thing for few minutes. He was gracious, funny and since someone had managed to bring in a piano, Dudley joked and riffed through a few tunes, ending with the opening bars from “Bolero” which – if you haven’t seen the movie -- had a very significant role in the story!

And that wrapped it up. The studio had a ‘private red-eye’ waiting to whisk Moore back to L.A. We chatted briefly, exchanged unlisted phone numbers and he was gone.

Walking to the car, I said to Abby, “Well, this has been some date! How many times do go to a movie, wind up winning a beauty contest and have dinner with the Star?”

“Just about every other weekend,” she deadpanned. Then laughed. “I can’t believe it! I’ve never had an evening like this ever!”

“It’s one of my specialties for First Dates. Glad you had a good time. And congrats on your new title! No one will ever win that again!”

“You’re right! So…what are we gonna do now? It’s not even midnight!”

“Well…I’d prefer someplace to chill out. I’d say ‘your place’ but that’s too presumptuous. I’d say ‘my place’, but the maid quit last week and the kitchen was just named a Superfund site.  Got any suggestions?

“Hey! Didn’t you say on the show you had a boat on Lake Lanier?”

“Is it like a houseboat or ski boat or a rowboat?”

“26-foot Sea Ray Sundancer. You could ski behind it, live on it, rowing would be difficult though.”

“Why don’t we go there? It’s a beautiful night, full moon. Quieter than any bar place in Atlanta.”

True. Back in the 1970s, the Lake Lanier area hadn’t yet grown to be Georgia’s Sun ‘N Fun Mecca. Weekends were busy but at this hour, things would be pretty peaceful.

“OK. Sounds like a plan. No swimming, tho. My Speedo is back at the house."

“Well, I don’t have mine either – but we do have our birthday suits.”

So off we went. Abby opened the sunroof to turn it into a moonroof with that big Georgia moon overhead and put the seat back for a good view. There was hardly any traffic as we zipped up GA 400. I leaned over to flip on the radio, but Abby reached out and pushed my hand away.

The next thing I heard, she was humming “Bolero”…