A Tightening Circle of Replacement Politics

It seems that ‘the team’ wants both to wage 5th generation war and to demand (and expect) cooperation from its ‘adversaries’, Alastair Crooke writes.

America’s foreign policy has become something of a global Rubik’s cube – At one moment, the cube is all red; the team seemingly ready to de-escalate tensions with Russia or China; yet the very next moment, the cube rotates to a different facet, with Washington swinging out with slashing sanctions, ruderies and military shows of force. What is so puzzling is that the cube is so aggressively blue one day, yet only the day before, or the day after, it has been at a mollifying red. 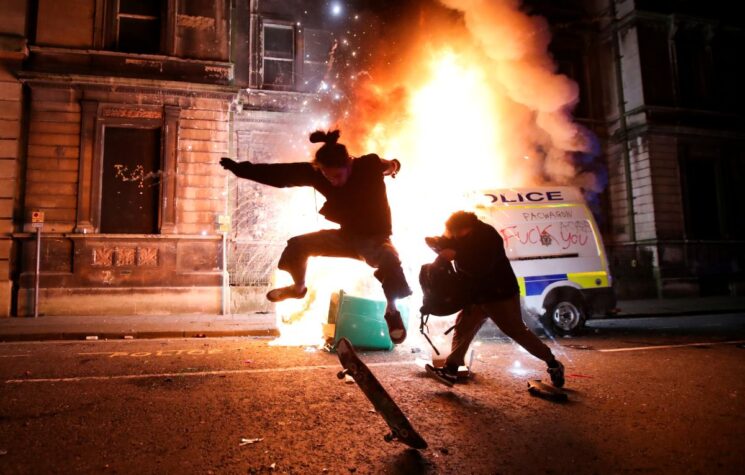 It is clear that the U.S. intends to maintain its primacy through its self-defined, global order; but the impression given is that ‘the team’ wants both to wage 5th generation war and, at the same time, to demand – and expect – co-operation from its ‘adversaries’ on a few particulars of interest to U.S. (such as climate change, which is the bedrock from which it hopes to re-boot its economic hegemony). No wonder the rest of the world is scratching its head, thinking that these contradictions make absolutely no sense, precluding either ‘end’ from being successful.

Some speculate that there are different ‘teams’ periodically seizing at the White House strings. Maybe there is some truth to this. But perhaps too, the mistake might be that we are ‘stuck’ in viewing today’s foreign policy through the too-conventional prism of a state pursuing its national interests abroad.

Maybe what we are witnessing is a foreign policy rooted in something of a different nature to national interests, as traditionally understood. We are perhaps rather, dealing with a ‘geo-politics of memory’ that is not bounded by any one particular state, but yet requires a ‘moral legitimisation’ that is much wider geographically. ‘National interest’ here would centre more on the management of cultural revolution, than on the logic to bi-lateral relations.

One wing to this ‘bird’ is evident in a powerful and (controversial) monologue delivered by Tucker Carlson, a leading (conservative) American political commentator, that is devoted to explaining just why one U.S. party is importing a new electorate to dilute, and replace, the existing U.S. electorate – and has been doing so for a decades. It is the dominating impulse within U.S. politics, Carlson avers; It is ‘replacement politics’.

Carlson gives examples of where U.S. states (such as California), have had their political complexion permanently altered through the mechanics of immigration. He insists that just as a fiat currency (in each citizen’s pocket) is devalued by the printing press churning out more and more currency, so the votes of an existing electorate can be politically devalued through excessive immigration – until the old electorate ultimately is replaced by new voters espousing allegiance to the importing party. This is not about compassion for immigrants, Carlson says, but power.

The aim, he continues, is to remake the electorate in opposition to the legitimate interests of the traditional White majority. Biden hinted at the permanence of this remake when, having extolled his very radical agenda (at his first press conference), he questioned whether there would still be a Republican Party at the culmination.

This latter aim, Carlson asserts, is at the core of today’s politics, and cites the NYTimes op-ed: We can replace them: “The potential is there; Georgia is less than 53 percent non-Hispanic–White”.

This has been going on for decades, Carson insists. And so it has. Christopher Lasch’s prescient The Revolt of the Élites had predicted, as long ago as 1994, a social revolution that would be pushed forward by the radical children of the bourgeoisie. Their demands would be centred on utopian ideals: diversity and racial justice. One of Lasch’s key insights was how future young American Marxisants would substitute culture war for class war.

This was the era too, of Bill Clinton and Tony Blair, when the American and European Left wooed Wall Street with promises of de-regulation, and began laying the groundwork for a long hold on power. Lasch had already foretold too, of the coming symbiosis between culture war and Big Business (which is now in full flower). It was Obama however, who sealed the marriage with the Euro-élites, and who fleshed out the notion of woke culture war as a replacement strategy. He is still there, behind the scenes, pulling strings.

And, just to escape from super-charged, highly partisan U.S. politics, let us turn to Europe now for an understanding of the fruits of culture war’s other wing – articulated this time, ‘across the pond’. In the Politics of Memory, Stanley Payne writes.

The resonance of this initiative to what is occurring in the U.S. is plain. But what is going on here, at the deeper level? Why the European mirroring?

Ultimately, the aim is to widen endorsement for the moral correctness of ‘woke’ revolution: To widen it to a European élite, already well primed (i.e. memory politics, as above) for cultural war – albeit one oriented more to replacing European ‘populists’ and nationalists, with adherents to the EU imperial project.

The ‘Re-set’ (the replacement of a withering manufacturing base by automation, and High Tech) is integral to this Rotation Plan. The Davos Re-set agenda explicitly specifies the need for new tools of public discipline: Those who elect to stand aloof from, or deny, the new (woke) political dispensation, therefore would likely to be ‘ritually condemned, and cast out’ as companies sign up to the new ideological ESG rules: just as those without a Vaccine Passport already are finding it hard to participate in public life, to travel, or to work (other than at home). A social credit system is the inescapable logical concomitant to the Vaccine Passport, in due course. The circle – theoretically – snaps shut on dissidence.

The foreign policy aspect of this putative ‘revolution’ should be clear. Russian or Chinese nationalism, or indeed any sovereignty, per se, constitutes a threat to a cultural ‘revolution’ designed to eliminate both. Russia and China may be freely denigrated, in this vision, placed on a par with Franco; but absent a wider European buy-in to the moral validity of the replacement of a founding population, in name of historic injustices, the shift would be perceived as flimsy at best.

The team acts aggressively (i.e. towards Russia) one day, but pulls back emolliently, too, when that aggression threatens Europe (i.e. the prospect of a Ukraine war) – since ‘the team still needs the tacit moral endorsement of European leaders for its unprecedented domestic experiment. In short, the Rotation of Power experiment is the tail wagging the U.S. foreign policy dog.

If all this sounds a tad fabulist, it is because it is. And it will most likely fail. The stresses imposed on U.S. societal cohesion by the launch of the woke cultural revolution may prove too great. The Chinese Cultural Revolution, launched by Mao (as part of his 1966 purge of Party rivals), very quickly devolved into a decentralized, semi-chaotic movement of Red Guards, students and other groups who shared ideas and programs, but who acted quite independent of the Party’s central leadership.

Already there are signs that the U.S. street activists have begun condemning their ostensible leaders as charlatans: Obama for his earlier deportations, and Pelosi for grandstanding over the George Floyd verdict: “So, again, thank you George Floyd, for sacrificing your life for justice”. (He did not choose to die.)

How will it end? No one can tell.

Dostoevsky in Demons reminds us though, just how sensitive, genteel, well-meaning Russian secular liberals of the 1840s had prepared the way for the 1860s generation of radicalized, ideology-maddened children, bent on tearing down the world, and to turn on their own parents. Revolutions have a habit of ‘eating’ their children.

In Europe, the anger at the sheer ineptitude of the EU institutional leadership on a range of issues from vaccines, to the near ‘war damage’ sustained by parts of the European economy (through endless lockdowns), speaks more to a Europe rummaging around for some effective leader with the vision to lead the continent away from the abyss. Is there one? None yet.