It’s simply naive and ignorant of human nature to expect people—especially the kind of people who become politicians—to dole out trillions of dollars without any hint of favoritism or impropriety.

resident Biden is taking a victory lap after signing his $1.9 trillion ‘COVID’ spending bill. “Help is here,” he wrote in a tweet promoting his plan.

But Americans who are initially glad to hear that more ‘COVID’ relief is supposedly on its way may be surprised when they learn that the latest legislation funnels $350 billion in unneeded taxpayer money to flush the coffers of state and local governments. 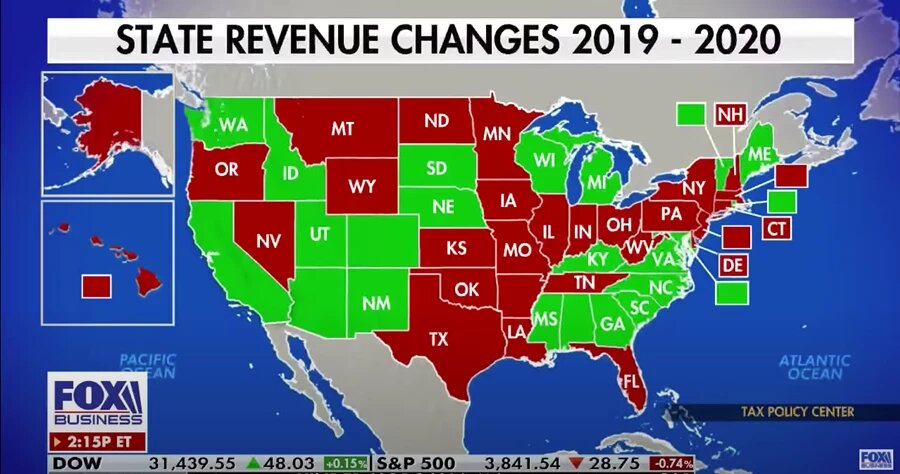 In the president’s telling, this is much-needed aid that will allow municipal governments facing massive COVID-related revenue pitfalls to pay their front-line emergency responders and essential personnel. But the facts reveal a different story.

While it’s plausible on its face to think that COVID would have led to a revenue drop for state and local governments, this never materialized in most places. According to JP Morgan, state revenue was “virtually flat” in 2020 nationwide while 21 states actually saw slight revenue upticks.

Cato Institute economist Chris Edwards noted that while there was a significant downturn in state revenue in the second quarter of 2020, overall it was balanced out by an uptick in the third quarter. “There is no need for more federal aid to the states,” he concluded.

So, the $350 billion in state “aid”—which cost roughly $2,442 per federal taxpayer—Congress  just passed wasn’t actually necessary. What’s the driving motivation behind it, then? This becomes clearer when we consider which states are getting the most taxpayer cash.

Here are the 20 states receiving the most money from the latest spending legislation.

Curiously, the Biden administration and Democrats in Congress factored in not just population but also the number of unemployed citizens. This had the direct effect of skewing the bailout benefits toward states that enacted harsher lockdowns and punishing states who prioritized preserving economic activity.

It must be noted that the list is skewed to include more “blue” states that voted for Biden, 13, than “red” states that voted for Trump, 6. It was, in many cases, Republican governors who opted for lighter restrictions and abandoned harsh lockdowns. In states like Florida, this has averted the unemployment and social destruction other states experienced—without producing noticeably worse COVID deaths.

The Only Explanation is Political Favoritism

One could argue that perhaps focusing on the unemployment rate is meant to ensure the aid goes to the states shortest on revenue. But why not use actual revenue shortfalls, then? Indeed, California tops the list for bailout money, yet the Golden State is actually running a budget surplus!

The only conclusion left to draw, however disappointing, is that Democrats crafted this bailout’s structure to favor states who pursued the COVID-19 policies they agree with—aka, states run by Democrats. Suffice it to say that political favoritism should never determine how limited taxpayer money is spent.

But, unfortunately, cronyism and favoritism are features, not a bug, of big government spending programs. As economist Ludwig von Mises once explained, big government programs concentrate enormous spending power in the hands of a few political officials; all but ensuring that favoritism follows.

“There is no such thing as a just and fair method of exercising the tremendous power that interventionism puts into the hands of the legislature and the executive,” Mises wrote. “In many fields of the administration of interventionist measures, favoritism simply cannot be avoided.”It’s simply naive and ignorant of human nature to expect people—especially the kind of people who become politicians—to dole out trillions of dollars without any hint of favoritism or impropriety.

It’s simply naive and ignorant of human nature to expect people—especially the kind of people who become politicians—to dole out trillions of dollars without any hint of favoritism or impropriety. So, while Americans will understandably be angered by the way Congress has carved out hundreds of billions for state governments that don’t need it, they’d be wrong to think this is a one-time mistake.

Corruption and dysfunction are baked into the cake when we entrust the government with vast economic powers.